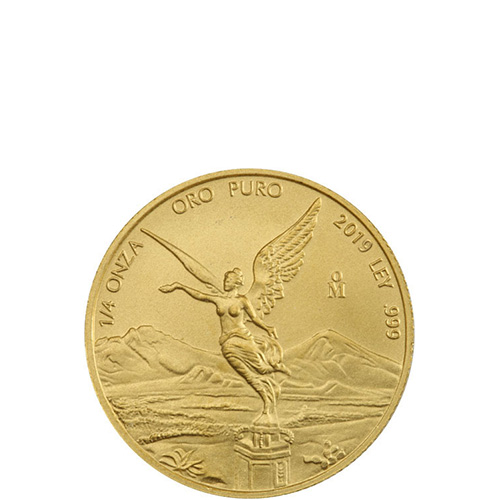 Among the pieces of gold for sale in the Mexican Mint’s Gold Mexican Libertad collection, only three coins were offered in its one-time 1981 release. The smallest of those original coins was the 1/4 oz Gold Libertad which boasted the second-highest mintage figure for that first release. Now, all five coins are released on an annual basis dating back to 1991. Today, 2019 1/4 oz Gold Mexican Libertad Coins are available to you online at Silver.com.

The Gold Mexican Libertad coin is a curious collection. The first issue of the coins included 1/4 oz Gold Libertads such as these 2019 specimens now available, along with a 1/2 oz and 1 oz coin. While the coins were the third to debut behind the Gold Krugerrand (1967) and Gold Maple Leaf (1979), they were offered in that one year and halted for a decade.

This allowed the Gold Chinese Panda and Gold American Eagle to take advantage of a small market and grab the attention of millions of investors before Gold Libertads were put into regular production in 1991. As a result, Gold Mexican Libertads remain visible coins to this day, but have much lower mintage figures than many of their counterparts.

All 2019 1/4 oz Gold Mexican Libertad Coins listed here are in Brilliant Uncirculated condition and come with protective plastic packaging. The 1/4 oz Gold Libertad’s highest mintage came in 1981 when 313,000 coins were struck. Its highest mintage since the 1991 establishment of regular coining came in 1992 when 28,106 coins were issued. Lately, it’s become the lowest minted coin in the collection next to the 1/2 oz coin. Just 1,250 coins were struck in 2018.

On the obverse of 2019 Gold Mexican Libertad Coins is the design of Winged Victory. Her figure first appeared on Mexican gold coins with the 1921 release of the Gold Centenario coin and she also appears on the Mexican Independence Victory Column.

The reverse side of 2019 1/4 oz Gold Mexican Libertad coins includes the modern seal of Mexico. The nation’s coat of arms includes an eagle wrestling with a snake on the arm of a cactus.

Please don’t hesitate to reach out to Silver.com with your questions. You can call us on the phone at 888-989-7223, chat with us live online, or simply send us an email with your inquiries.