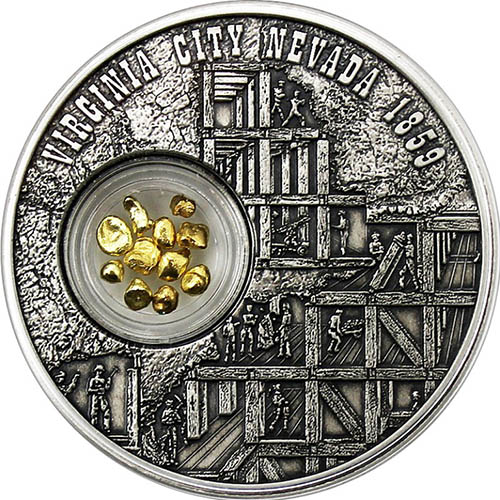 America’s expansion from the boundaries of the original 13 colonies was often defined by the discovery of valuable assets such as gold and silver. Among the early examples the gold discoveries in Georgia and the southeast in the 1830s. One of the most significant precious metal discoveries in North America was the Comstock Lode in Nevada in 1859. Today, 2019 1 oz Antique Silver Mesa Grande Nevada Gold and Silver Rush Coins are available to you online at Silver.com.

After prospectors had spent much of the 1840s heading toward California to seek out wealth in the gold mines discovered in the territory, the 1850s and 1860s would be spent looking back toward the east as the Comstock Lode in Nevada unveiled a treasure trove of gold and silver for prospectors and the US government.

All of the 2019 1 oz Antique Silver Mesa Grande Nevada Gold and Silver Rush Coins in this listing are available to you inside of beautiful black presentation boxes. Each coin comes with its own numbered Certificate of Authenticity. The coins also include an inset capsule that features 24-karat gold that denotes the combined gold and silver wealth of the Comstock Lode.

First discovered in Nevada in 1849, the Comstock Lode in Nevada would not spark wider settlements and mining operations until a decade later in 1859. The Comstock was the reason behind the founding of Gold Hill and Virginia City in 1859 and eventually became the most significant silver-mining district in the United States.

On the obverse of the 2019 1 oz Antique Silver Mesa Grande Nevada Gold and Silver Rush Coins is the image of a silver mine in operation within the Comstock Lode. As of 2014, the Lucerne Mint near Gold Hill produced 222,416 ounces of silver and 19,601 ounces of gold.

The reverse side of 2019 Antique Silver Mesa Grande Nevada Gold and Silver Rush Coins includes the image of an American bald eagle with the inset capsule visible above its head. There are also sunburst rays visible on this side of the coin that emanate from the capsule that holds the 24-karat gold.

Please feel free to reach out to Silver.com with your questions. You can call us at 888-989-7223, chat with us live online via our chat service, or email us directly.