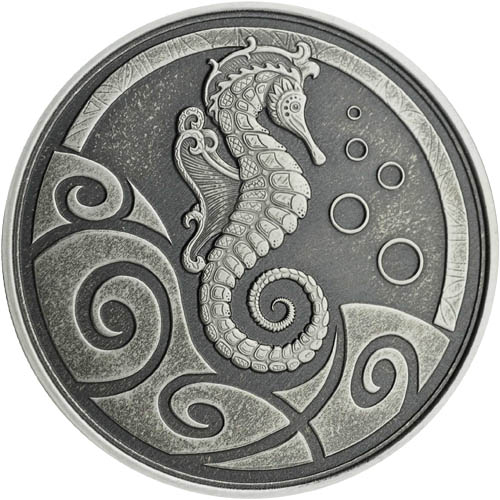 The Samoa Seahorse Series from the Scottsdale Mint is a second major series of silver bullion coins for sale in the South Pacific alongside Fijian coins. The mint offers the Samoa Seahorse coin with the image of the seahorse species on the obverse offering bullion and antique versions of the coin. 2019 1 oz Antique Silver Samoa Seahorse Coins are now available to you for purchase online at Silver.com.

The oceans of the world are full of unique species that the average individual does not see on a daily basis. The seahorse genus consists of 45 species mainly found in shallow tropical and temperate saltwater locations around the world. Most of these species are located between 45 degrees North latitude and 45 degrees South latitude. Among these, four major species of seahorse are found in Pacific waters.

Located in the South Pacific Ocean, Samoa is an independent state that consists of two main islands and four smaller islands. After decades of control by New Zealand, Samoa has been an independent nation since 1962 and was the first Polynesian nation to regain independence in the 20th century.

On the obverse face of 2019 1 oz Antique Silver Samoa Seahorse Coins is the image of a seahorse in right-profile relief. The image of the seahorse includes its horse-like head and neck with a segmented body that has bony armor and a curved, prehensile tail. The background field includes Polynesian tribal wave designs in the lower-left field and a subtle seagrass design along the top rocker of the design field.

The reverse of 2019 Antique Silver Samoa Seahorse Coins bears the coat of arms for the nation. Inspired by the seal of the United Nations, the nation’s coat of arms focuses on a crest with the Southern Cross star constellation as used on the national flags of Australia and New Zealand, both members of the Commonwealth of Nations like Samoa. The top part of the crest has a single palm tree and is capped by a Christian cross.

These 2019 1 oz Antique Silver Samoa Seahorse Coins are available to purchase with an individual protective plastic capsule or skinboard of five coins. All coins are in Brilliant Uncirculated condition.

We encourage Silver.com customers to call us at 888-989-7223. Our customer service team is also available online through our live chat and email address.