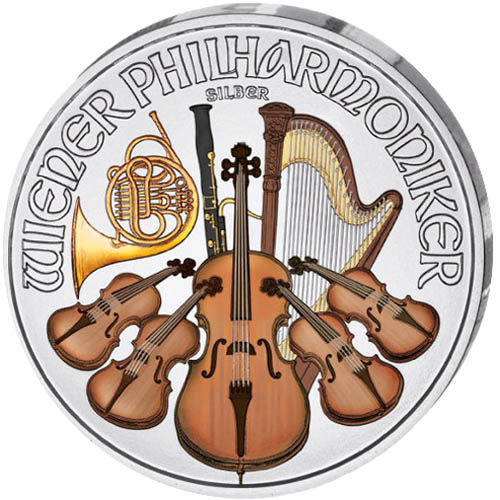 The Silver Philharmonic coins made a splash in 2008 when first issued by the Austrian Mint. Released in February, the coins went on to sell 7.773 million units in that first year. Mintage figures continued to climb through the Great Recession, peaking at 17.83 million coins in 2011 and again jumping to 14.5 million in 2013.

All of these 2019 1 oz Colorized Silver Austrian Philharmonic Coins are available to you with a protective capsule to house the coin. The individual coins are available in Brilliant Uncirculated condition. These are the standard silver bullion versions of the Silver Austrian Philharmonic coinage with colorized lacquer applied to certain design elements for a unique and distinctive visual appeal.

On the reverse of 2019 1 oz Colorized Silver Austrian Philharmonic Coins is a selection of eight musical instruments. This includes a cello, four violins, a harp, a bassoon, and a French horn. The brass instruments are colorized to appear as they would in real life, while the cello and violin have wooden hues.

The obverse of 2019 Colorized Silver Austrian Philharmonic Coins includes the design of the Great Organ. This massive musical instrument is located within the Golden Hall, or Musikverein, in the city of Vienna. The capital of Austria is home to the Vienna Philharmonic Orchestra, which was formally founded in 1843.