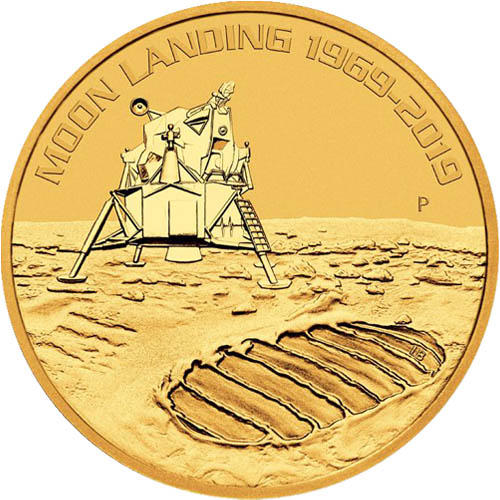 There are a number of gold bullion coins debuting in 2019 to mark the 50th anniversary of NASA’s Apollo 11 spaceflight. The variety of coins includes options from the United States Mint, as well as designs from world-renowned mints like the Perth Mint. Today, 2019 1 oz Gold Australian Anniversary of the Moon Landing Coin is available to you online at Silver.com.

NASA spent the 1960s striving to fulfill the ultimatum set forth for the nation by President John F. Kennedy. Responding to early successes in the Space Race by the Soviet Union, President Kennedy set a bold goal for the nation to send a man to the moon and return him safely to the Earth’s surface before the decade was out. With months to spare, on July 20th, 1969, mankind reached the moon during the Apollo 11 space flight.

All 2019 1 oz Gold Australian Anniversary of the Moon Landing Coins are available to you for purchase online in Brilliant Uncirculated condition. These coins are offered with an individual protective plastic capsule courtesy of the Perth Mint in Australia.

On the obverse of 2019 1 oz Gold Australian Anniversary of the Moon Landing Coins is the right-profile bust of Queen Elizabeth II. This is the newest effigy of Her Majesty on Australian coins and marks the sixth different design used during her long reign. Not only the latest design to feature on the coins, this is also the first since the 1960s to include the Queen’s neckline and shoulders in the portrait.

The reverse side of 2019 Gold Australian Anniversary of the Moon Landing Coins includes a depiction of the lunar surface. Here, you can see the Eagle lunar lander in the background with the footprint of one of the astronaut’s space suits left behind. Buzz Aldrin and Neil Armstrong were the first humans on the moon’s surface and spent a total of 21.5 hours on the moon.

Please don’t hesitate to reach out to Silver.com with any questions. You can call us at 888-989-7223, chat with us live online, or simply send us an email.