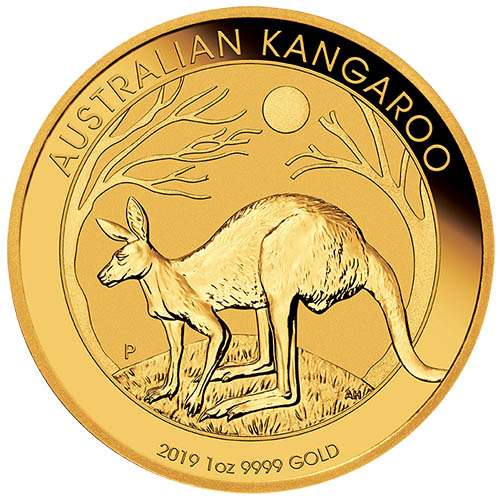 Each 2019 1 oz Gold Australian Kangaroo Coin in this product listing at Silver.com comes to you in Brilliant Uncirculated condition. The coins in the 1 oz weight are available to buyers in protective capsules individually or in boxes of 100 coins in total. The Perth Mint uses an unlimited minting approach for the 1 oz version of the coin. This means Perth Mint will strike the coins to meet demand until December 2019, at which point the design will be retired to make way for the next issue in the series.

For 2019, the Perth Mint is launching a new design of Queen Elizabeth II on the obverse of its major bullion coins. The Gold Kangaroo gets the new right-profile portrait of Her Majesty on its obverse as a result. The new image is the sixth of the Queen to appear on Australian coins during her long reign as Queen of England, and Queen of Australia, and is the first since the 1960s that features her neckline and shoulders in the design.

On the obverse of 2019 1 oz Gold Australian Kangaroo Coins is the new effigy of Queen Elizabeth II. Designed by Jody Clark of the Royal Mint of England, a version of this design debuted on British coinage in 2016 and now comes to Australian coins.

The reverse of 2019 Gold Australian Kangaroo Coins features the image of a singular kangaroo standing on a mound of dirt. The background field features stylized trees bending with the edges of the coin’s design field and depicting a sun rising into the sky above.

The Perth Mint is located in the state of Western Australian and controlled by the local state government. Opened in 1899 as the third and final Royal Mint of England facility on the continent, Perth Mint is the oldest-operating mint in the nation and is independent of the Royal Australian Mint in Canberra.