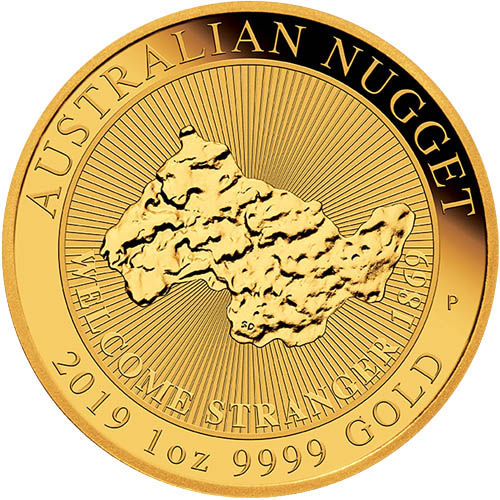 The Gold Australian Nugget was a series of gold coins for sale from the Perth Mint between 1986 and 1989. The coins were issued with a new image of a golden nugget on the reverse each year and the Queen’s effigy on the obverse. Since 1990, that program has been known as the Gold Australian Kangaroo. For 2019, the name is revived for a special commemorative bullion release. Today, 2019 1 oz Gold Australian Nugget Coins are available to you online at Silver.com.

All 2019 1 oz Gold Australian Nugget Coins available to you here today celebrate the 1869 discovery of the Welcome Stranger Gold Nugget. These coins are individually housed inside of protective plastic capsules and come in Brilliant Uncirculated condition from the Perth Mint.

In February 1869, John Deason and Richard Oates dug out what was to become one of the largest gold nuggets ever found. Deason initially found it 3 cm beneath the dirt near the roots of a tree trunk. He did not announce the discovery, but returned later with Oates to remove the nugget and unveil it to family, friends, and the world.

On the reverse of 2019 1 oz Gold Australian Nugget Coins is the image of the Welcome Stranger Gold Nugget. Deason was a Cornish miner who had come to Australia and was working in the Bulldog Gully near Moliagul in Victoria when it found the nugget. The two men brought it to a bank to be weighed and valued. It tipped the scales at 66 kg and had a worth of 10,000 pounds in that time period.

The obverse of 2019 Gold Australian Nugget Coins features the right-profile portrait of Queen Elizabeth II. This is the sixth-generation effigy of Her Majesty to feature on Australian coins and the first since the 1960s to show her neckline and shoulders in the design.

Please feel free to reach out to Silver.com with any questions you might have about gold for sale. You can call us at 888-989-7223, chat with us live online, or email us directly.