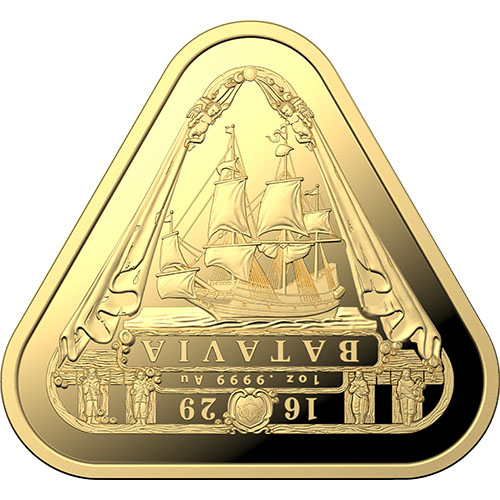 The Royal Australian Mint has a new series of silver and gold for sale for numismatists. The 1 oz coins of the Shipwreck Series launch with the design of the Batavia, a Dutch East India Company ship that struck the reefs off Houtman Abrolhos near the coast of Western Australia and led to a double-disaster. Right now, 2019 1 oz Gold Australian Shipwreck Batavia Coins are available to purchase online at Silver.com.

Each 2019 1 oz Gold Australian Shipwreck Batavia Coin in this product listing comes in Brilliant Uncirculated condition. The coins are housed inside of special triangular-shaped protective capsules to match the shape of the coins. Additionally, the gold coin release in this series comes with a numbered Certificate of Authenticity.

The Batavia sailed from Amsterdam in October 1628 full of trade silver and gold headed for the Dutch East Indies capital of Batavia, now known as Jakarta. Mutineers steered the ship off course though after rounding the Cape of Good Hope and it eventually shipwrecked on a reef near Western Australia’s coast.

On the obverse of the 2019 1 oz Gold Australian Shipwreck Batavia Coins is a depiction of Queen Elizabeth II as designed by Jody Clark. This appears at the top with inscriptions of “Elizabeth II,” “Australia,” and “2019.” Below the Queen’s effigy, the scenes of chaos that played out after the wreck are depicted.

When the Batavia struck the reef, it quickly sank and capsized resulting in the death of 40 people by drowning. The total passenger and crew roll included 341 souls. While the captain and a small crew went in search of fresh water, mutineers tried one last time to take control of the situation and eventually murdered 110 other passengers for not following along with the attempted mutiny.

The reverse of 2019 1 oz Gold Australian Shipwreck Batavia Coins features the image of the ship after its construction. The ship was built in Amsterdam in 1628 as the flagship of the Dutch East India Company. When you flip the coin upside down, the reverse design makes it possible to read the inscriptions but places the ship in its capsized position in a nod to its ultimate fate.