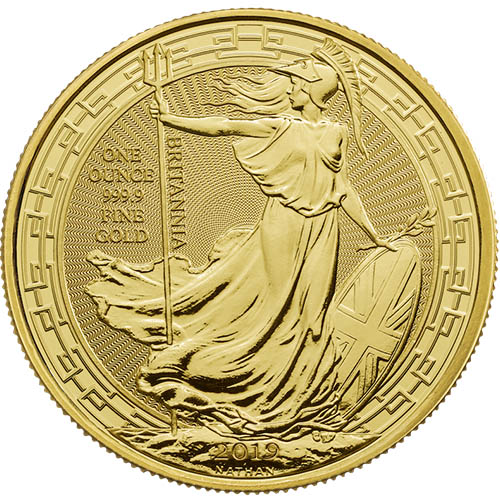 Gold Britannias are well-known gold coins for sale from the Royal Mint. Available since 1987, this annual-release gold bullion coin features the same design of Britannia on the reverse every year. In some cases, the Royal Mint issues the Gold Britannia with unique design aspects in low-mintage collections. Today you can get the 2019 1 oz Gold British Oriental Border Britannia Coin online at Silver.com.

The new Oriental Border issue of Gold Britannias draws inspiration from the British Trade Dollar issued in the Far East during the 19th and early 20th centuries. The first trade dollars were issued following the First and Second Opium War. Britain didn’t want its colonies in the region relying on various foreign currencies for transactions, so trade dollars were issued.

These British Trade Dollars often featured the image of Britannia on one side and were issued at times with an oriental border design. All 2019 1 oz Gold British Oriental Border Britannia Coins revive the appearance of those British Trade Dollars. The coins are available in Brilliant Uncirculated condition with individual protective plastic capsules.

On the obverse side of 2019 Gold British Oriental Border Britannia Coins is the image of Queen Elizabeth II. This is the definitive fifth-generation effigy of Her Majesty created in 2015 by Jody Clark for the Royal Mint of England. Her Majesty is depicted wearing the Royal Diadem crown and is captured at the age of 89 in this work of art. There is a guilloche background design element that the Royal Mint introduced in certain bullion coins in 2018.

The reverse of 2019 1 oz Gold British Oriental Border Britannia Coins includes the modern image of Britannia. She stands at the edge of the British coast overlooking the English Channel watching out over the waters for any foe who might threaten the safety and sovereignty of Britain. This design came from Philip Nathan and was created in 1987 for the Gold Britannia.

Please don’t hesitate to reach out to Silver.com if you have any questions about buying gold. You can call our customer service team at 888-989-7223, chat with us live online, or simply send us an email with your inquiries.