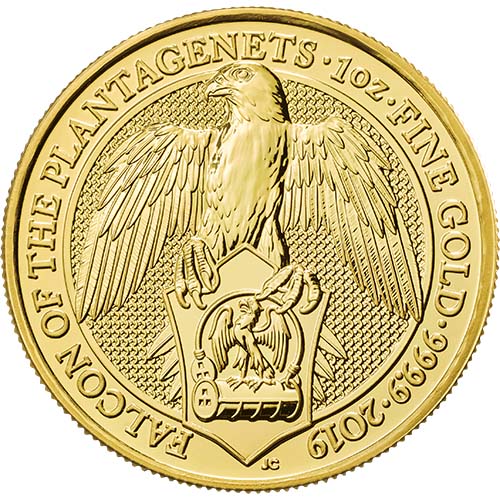 The White Falcon of the Plantagenets is one of the oldest animals in the heraldry of England. Passed down to Queen Elizabeth II through the royal arms courtesy of King Edward III, the falcon was beloved by countless royals and used over nearly four centuries of rule in England. Right now, 2019 1 oz Gold British Queen’s Beast Falcon of the Plantagenets Coins are available to purchase online at Silver.com.

Each of the 2019 1 oz Gold British Queen’s Beast Falcon of the Plantagenets Coins in this listing from Silver.com is available to you for individual purchase or bulk order. The individual coins are housed in protective plastic. Meanwhile, multiples are available to you inside of coin tubes of 10 or Monster Boxes of 100 coins with 10 tubes. Each individual 1 oz gold coin is in Brilliant Uncirculated condition.

The House of Plantagenet ruled on the English throne from the accession of Henry II in 1154 until the death of King Richard III in 1485 at the Battle of Bosworth Field. For much of its history, the Plantagenets in England were split between the House of York and the House of Lancaster, but across both houses many monarchs would use the White Falcon introduced by Edward III on his official seal.

On the reverse face of 2019 1 oz Gold British Queen’s Beast Falcon of the Plantagenets is the White Falcon of Edward III. Included in this design is the shield as it was seen in 1953 during the coronation of Elizabeth II. Many of Edward III’s descendants would use variations on this design on their shields, but the White Falcon present at Elizabeth II’s coronation held a shield with a second white falcon within a golden fetterlock in the open position.

The obverse side of 2019 Gold British Queen’s Beast Falcon Coins includes the effigy of Queen Elizabeth II. In this latest-generation effigy of Her Majesty, the fifth during her long reign, she is depicted at the age of 89 with the Royal Diadem diamond crown.

If you have any questions, please feel free to contact Silver.com. You can call us at 888-989-7223, chat with us live online, or contact us via email.