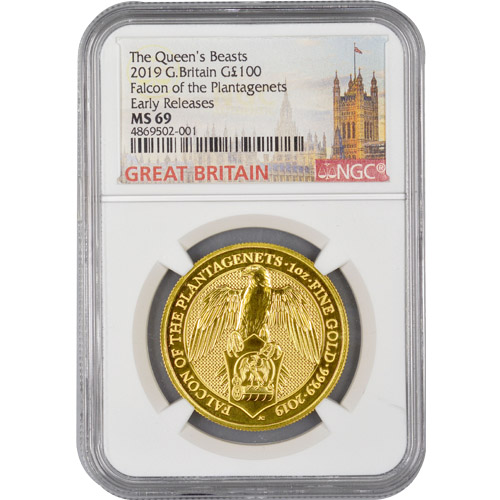 The Queen’s Beast Series of gold bullion coins includes a 1 oz option and a 1/4 oz coin. The 1 oz coin is equal in popularity among numismatists with the Gold Britannia from the Royal Mint. The 10 designs of the series each include a 1 oz coin release. The 2019 1 oz Gold British Queen’s Beast Falcon of the Plantagenets Coin is currently available to you for purchase online at Silver.com in near-perfect condition.

The Queen’s Beast Series features a total of 10 designs. Launched in 2016, the program is set to run through 2021 with two design releases per year through the final year of availability when one design is issued. Each one of the heraldic beasts is based upon a creature present as a sculpture at the coronation ceremony of Queen Elizabeth II in 1953.

King Edward III reigned over England as a Plantagenet king for 50 years during the middle and late 1300s. Edward III had a love of hawking and used the white falcon as his personal seal. In his uses, the white falcon clutched an open fetterlock as a sign of his rightful claim to the throne of England.

On the reverse of 2019 1 oz Gold British Queen’s Beast Falcon Coins is the image of a powerful falcon clutching the top of Edward III’s royal arms. The shield includes the second white falcon clutching a fetterlock. As the rightful Queen of England today, this design for Elizabeth II’s use also includes an open fetterlock.

The obverse of 2019 Gold British Queen’s Beast Falcon of the Plantagenets Coins includes a fifth-generation portrait of Queen Elizabeth II. Her Majesty is featured in right-profile relief in a design depicting her at the age of 89 as she wears the Royal Diadem crown.

These 2019 1 oz Gold British Queen’s Beast Falcon of the Plantagenets Coins are available in Mint State 69 condition. This certification indicates the coins showcase full, original mint luster with a maximum of two minor detracting flaws. The Early Release label indicates the coins arrived within 30 days of the initial release by the Royal Mint.

We encourage Silver.com customers to call us at 888-989-7223. You can also connect with us online through our live chat and email address features.