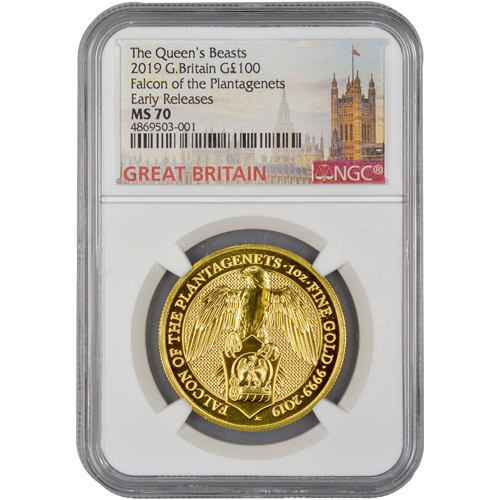 The White Falcon of King Edward III is one of the greatest heraldic beasts passed down through the history of the royal arms from the House of Plantagenets. Reigning England from 1154 to 1485, the Plantagenets reigned over a period of legislative, governmental, and military evolution for England. Right now, 2019 1 oz Gold British Queen’s Beast Falcon of the Plantagenets coins are available to purchase in perfect condition at Silver.com.

Each of the 2019 1 oz Gold British Queen’s Beast Falcon of the Plantagenets Coins in this listing earned a perfect certification from the NGC. Mint State 70 coins exhibit full, original mint luster with no detracting flaws visible on the surface areas or design elements of the coin. The Early Release label indicates the coins arrived at the NGC within 30 days of their initial release from the Royal Mint.

King Edward III reigned over England for 50 years, the second-longest rule for any Medieval English monarch behind his great-grandfather Henry III. Edward III oversaw one of the greatest periods of governmental and legislative evolution in England and turned the kingdom’s military into one of the most powerful in Europe.

On the reverse of 2019 Gold British Queen’s Beast Falcon of the Plantagenets Coins is the White Falcon of King Edward III. The design features a falcon supporting the shield and another white falcon on the shield clutching an open fetterlock. The use of an open fetterlock symbolizes a monarch’s rightful claim to the throne. Edward III’s seal was popular with monarchs through the Plantagenet, Lancastrian, and Tudor rule of England.

The obverse of 2019 1 oz Gold British Queen’s Beast Falcon of the Plantagenets Coins features the right-profile portrait of Queen Elizabeth II. England’s longest-reigning monarch, Elizabeth II is depicted here in a fifth-generation design created in 2015 by Jody Clark for the Royal Mint. The design includes Elizabeth II wearing the Royal Diadem crown on her head.

If you have any questions, please don’t hesitate to reach out to Silver.com. Our customer service team is available at 888-989-7223, online using our live chat, and via our email address. You can also find the price of gold updated on our website throughout the day.