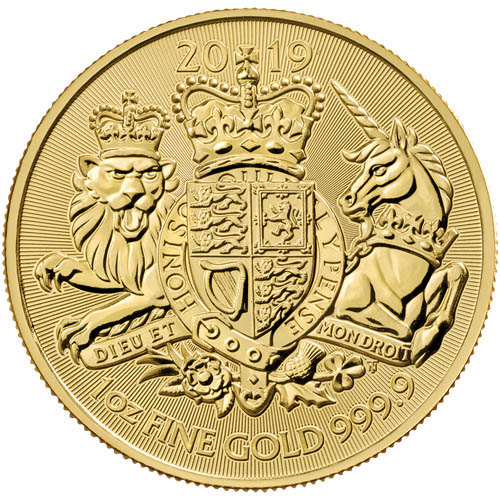 The Royal Arms of England is the official coat of arms used by British monarchs. Though the arms used today by the United Kingdom represent Queen Elizabeth II on the international stage, the arms have changed routinely over the centuries to represent the countless other kings and queens that have reigned over England. Right now, a new royal arms design is available to purchase at Silver.com on the reverse of 2019 1 oz Gold British Royal Arms Coins.

The current Royal Arms of the United Kingdom, the standard of Queen Elizabeth II today as the reigning monarch, has been in use since 1837 during the reign of Queen Victoria. The design underwent only minor changes when Victoria ascended to the throne. Her predecessor, King George III used the same basic design, but his Royal Arms featured the White Horse of Hanover in the design. As Victoria was not from the House of Hanover, the horse was removed.

On the reverse of 2019 1 oz Gold British Royal Arms Coins is the image of the modern Royal Arms of the United Kingdom. This design includes a quartered shield with the three lions of England in the upper-left and lower-right quadrants. The upper-right quadrant bears the rampant lion of Scotland. The lower-left quadrant features the Harp of the Kingdom of Ireland, which remains in the royal arms as a nod to Northern Ireland’s position in the United Kingdom. The royal shield is flanked to the left by the Lion of England and the right by the Unicorn of Scotland.

The obverse of 2019 Gold British Royal Arms Coins features the fifth-generation effigy of Queen Elizabeth II. Her Majesty features here in right-profile relief in a design from Jody Clark. Created in 2015, it depicts the Queen at age 89 wearing the Royal Diadem crown on her head.

If you have any questions, please don’t hesitate to contact Silver.com. Our customer service team is available to you at 888-989-7223, online using our live chat, and via our email address.