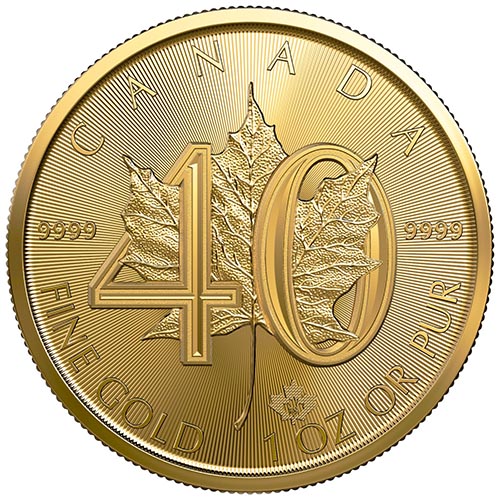 Few gold coins for sale are as well known as the Gold Canadian Maple Leaf. The official gold bullion coin of Canada, this coin has been released with an unchanged design in every year since 1979. The only changes the Royal Canadian Mint has ever made related to the purity of the coins, boosting them from .999 to .9999 in November 1982. Right now, 2019 1 oz 40th Anniversary Gold Canadian Maple Leaf Coins are available to purchase online at Silver.com.

Each 2019 1 oz 40th Anniversary Gold Canadian Maple Leaf coin in this product listing comes to you in Brilliant Uncirculated condition from the Royal Canadian Mint. The RCM offers the coins inside of protective packaging, mint tubes, or within boxes of 500 coins. The coins in this issue are a special-edition release and the limited volume is the result of each coin struck using gold responsibly sourced from mines right in Canada.

The first Gold Canadian Maple Leaf Coins were issued in 1979 with only a 1 oz coin available and a purity of .999 fine gold. In November 1982, the Royal Canadian Mint increased purity to .9999 fine gold. In the years to follow, the mint added fractional-weight coins to the series.

The obverse of 2019 40th Anniversary Gold Canadian Maple Leaf Coins features the right-profile portrait of Queen Elizabeth II. In this fourth-generation effigy of the Queen, Susanna Blunt captures the image of Her Majesty without a crown on her head. Designed in 2003, this is the first monarch portrait to lack a crown since the reign of King George VI.

These 2019 1 oz 40th Anniversary Gold Canadian Maple Leaf Coins have two security features included in the design. On both sides, you’ll find radial lines in the background field. The reverse also features a micro-engraved maple leaf privy that, when viewed under magnification, features the date mark “19.”

If you have any questions, please don’t hesitate to ask. Silver.com customer service is available to you at 888-989-7223, online using our live chat service, and via our email address.