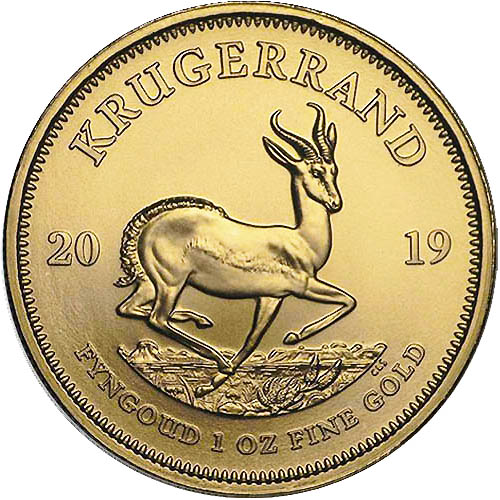 The Krugerrand was introduced by the South African Mint and Rand Refinery in 1967. The name of the gold bullion coins came from a combination of the national unit of currency, the Rand, and the last name of the nation’s first-ever elected president, Paul Kruger.

Gold Krugerrand coins were the only option for private gold investment regularly issued between 1967 and 1979. During this period of time, the Gold Krugerrand captured 90% of the global gold coin market and remained an immensely popular coin through the 1980s. By 1985, the hottest market for the Gold Krugerrand was the United States and that was in spite of a Western boycott on the importation of the coins.

On the obverse side of 2019 Gold South African Krugerrand Coins is the effigy of Paul Kruger. Popularly referred to as Oom Paul in Afrikaans, Kruger was the first man elected President of the South African Republic in 1883. He would serve until 1901 when he was forced into exile during renewed confrontations between the newly independent nation and its former colonial power, Great Britain.

The reverse face of 2019 1 oz Gold South African Krugerrand Coins includes the image of a Springbok antelope. This particular species of antelope is the national animal of the modern Republic of South Africa and features in right-profile relief on this side of the coins. The engravings on both faces of Gold Krugerrand coins are inscribed in both English and Afrikaans.

If you have any questions about the Gold South African Krugerrands, please don’t hesitate to ask. Silver.com customer service team members are available at 888-989-7223, online using our live chat, and via our email address.