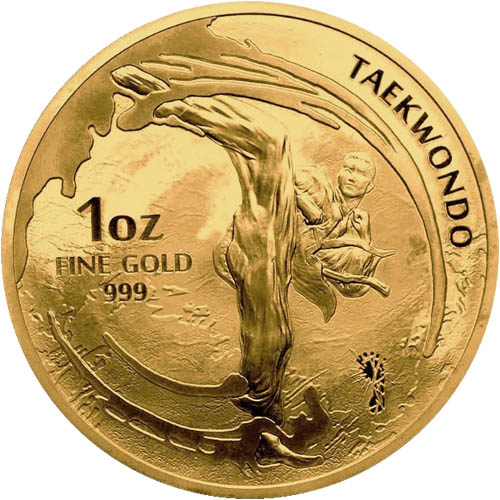 Each 2019 1 oz Gold South Korean Taekwondo Medal in this product listing comes with its own protective plastic capsule. These gold medals are in Brilliant Uncirculated condition and represent the first release of the global martial arts designs from KOMSCO. Taekwondo is a Korean martial art developed in the 1940s and 1950s.

On the obverse of 2019 1 oz Gold South Korean Taekwondo Medals is a martial artist practicing his craft. Taekwondo is characterized by the use of head-height kicks, spinning and jumping kicks, and a series of fast-kicking techniques. The competitive sport was part of the World Games from 1981 to 1993 and has been an official Olympic sport since 2000.

The reverse side of 2019 Gold South Korean Taekwondo Medals includes the image of the national symbol for the Republic of Korea. Known as the Taegeuk, the symbol was chosen for the first national flag back in the 1880s. The Taegeuk represents a balance in the universe, with its red half matching positive cosmic forces and the blue half representing negative cosmic forces. Since the split of the peninsula, the Taegeuk has featured on the national flag for South Korea.

If you have any questions about these new gold medals from KOMSCO, you can reach out to Silver.com customer service. Our team members are available to you at 888-989-7223, online using our live chat service, and via our email address.