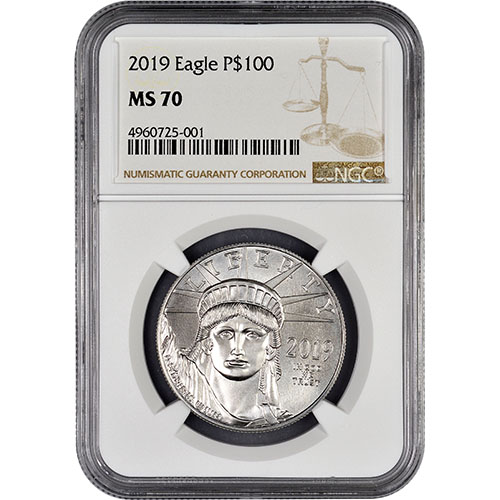 Each 2019 1 oz Platinum American Eagle available for you to purchase today comes in perfect condition. The NGC issues Mint State 70 certifications to coins with full, original mint luster and no detracting flaws visible on the surface areas or design elements.

Platinum American Eagle coins debuted in 1997 as bullion and proof coins with weights including 1 oz, 1/2 oz, 1/4 oz, and 1/10 oz options. Those four weights persisted through 2008, at which point the bullion program halted for five years and the proof series was whittled down to just the 1 oz platinum coin.

The obverse of 2019 1 oz Platinum American Eagle Coins features the design known as Liberty looking into the future. It was created in 1997 by John Mercanti and captures a close-up look at the face of Liberty on the Statue of Liberty, along with inscriptions of “Liberty,” “In God We Trust,” and the date mark.

On the reverse of 2019 Platinum American Eagles is a design featuring an American bald eagle in flight over the continent. This was created in 1997 by Thomas D. Rogers, a sculptor and engraver working for the United States Mint.

If you have any questions, please contact Silver.com. Our customer service team is available at 888-989-7223, via our live web chat, and through our email address.