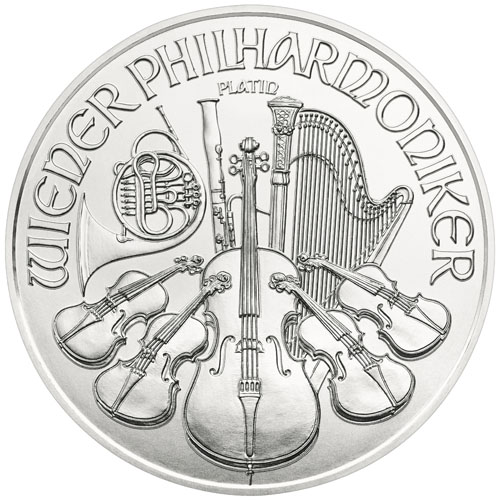 While gold and silver bullion coins are common offerings from sovereign mints, platinum coins have seen slower adoption in major coin programs. For example, 2016 saw the addition to platinum coins in two long-running programs. Among them was the Austrian Mint’s addition of a Platinum Philharmonic coin. The 2019 1 oz Platinum Austrian Philharmonic Coin is currently available to you for online purchase at Silver.com.

The Vienna Philharmonic Orchestra dates to the mid-19th century in one of Europe’s beloved cultural capitals: Vienna, Austria. Though the orchestra was formally founded in 1842, there are historical records showing that orchestral performances took place in the city on a regular basis starting as early as the 1830s.

On the obverse of all 2019 1 oz Platinum Austrian Philharmonic Coins is the image of the Great Organ. This massive instrument is found within the Golden Concert Hall. The orchestra hall is also known as the Musikverein and is located in the nation’s capital city of Vienna within the Innere Stadt neighborhood.

The reverse of 2019 Platinum Austrian Philharmonics features a collection of musical instruments. These instruments are a sampling of those commonly used by the members of the Vienna Philharmonic Orchestra and include a cello, violins, flute, harp, bassoon, and a horn. Engravings on both sides of the coin are in German, which is the official language of Austria.

These 2019 1 oz Platinum Austrian Philharmonic Coins are available in Brilliant Uncirculated condition. The Platinum Philharmonics are shipped inside of protective packaging or mint tubes of 10 coins.

We encourage all Silver.com customers to reach out to us with questions at 888-989-7223. You can also connect with us online through our live chat and email address features. We make it easier for you to track platinum prices as well by listing them on our site at all times!