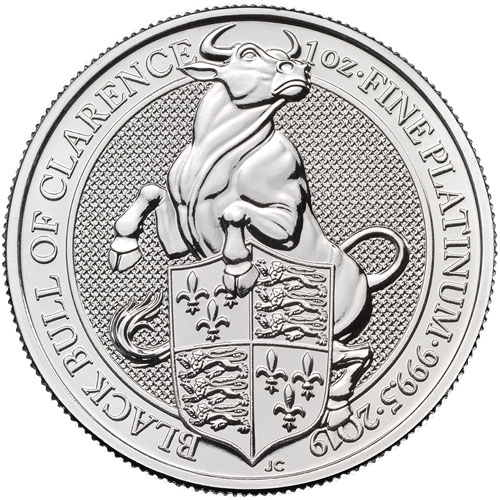 The Queen’s Beast Series of coins from the Royal Mint come in a variety of designs and versions. The series includes a total of 10 different designs with gold, silver, and platinum bullion options for buyers. The newest additions are the 10 oz silver coin and a 1 oz platinum coin. Today, 2019 1 oz Platinum British Queen’s Beast Black Bull Coins are available to you online at Silver.com.

All 2019 1 oz Platinum British Queen’s Beast Black Bull Coins are available in Brilliant Uncirculated condition. The coins are available individually inside of protective plastic or in bulk. The bulk orders of the coins come in mint tubes of 10 coins or Monster Boxes of 100 coins that include a total of 10 tubes.

The reverse of 2019 1 oz Platinum British Queen’s Beast Black Bull Coins features the design of the Black Bull of Clarence. Brought to the royal arms by King Edward IV, the Black Bull stands behind a quartered heraldic shield with three lilies from France in two quadrants and three lions from England in the other two quadrants.

King Edward IV reigned twice during the 1400s. He was locked in battle with King Henry VI of the House of Lancaster by 1461, dethroning him after an initial victory in the Wars of the Roses. He reigned for almost 10 years before Henry VI’s return from Scotland and the short-term defeat of Edward IV’s forces. The House of York would return to power within a year, but eventually fall in defeat again when Edward IV’s brother Richard III was defeated by King Henry VII to reestablish Lancastrian rule.

On the obverse of 2019 Platinum British Queen’s Beast Black Bull Coins is the image of Queen Elizabeth II. Her Majesty is featured in right-profile relief in a fifth-generation design from Jody Clark of the Royal Mint.

Please feel free to contact Silver.com with questions. You can call us at 888-989-7223, chat with us live online, or simply send us an email. You can also check platinum prices on our website at any time.