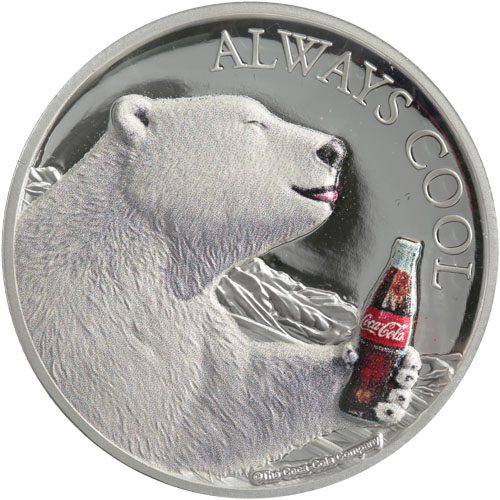 In 1993, Coca Cola captured the imagination of millions around the globe with its “Northern Lights” ad that featured in the “Always Coca Cola” campaign. The ads featured a lovable family of polar bears rendered with computer graphics that were ahead of the time in the early 1990s. Today, that Coca Cola ad icon comes to life again on the 2019 1 oz Proof Colorized Silver Fiji Coca Cola Coin available online at Silver.com.

Most Americans can remember seeing at least one advertisement for Coca Cola during the 1990s that featured the family of animated polar bears. Romping around the Arctic, a group of cubs were always playfully jabbing one another and drawing the attention of their watchful mom. In the end, the commercials always concluded with the polar bears prying open a bottle of Coca Cola and enjoying the refreshment.

All 2019 1 oz Proof Colorized Silver Fiji Coca Cola coins in this product listing have a colorized bottle of Coca Cola in the reverse design field. The coins are otherwise standard proofs with matte design elements and clear background fields. Each one is uniquely housed inside of a Coca Cola collectible box. The boxes are in the shape of bottle caps and the tins include a Certificate of Authenticity with the sequential serial number issued to that coin in the release.

On the reverse of 2019 Proof Colorized Silver Fiji Coca Cola Coins is a singular Polar Bear sitting with its paw raised as it enjoys a bottle of Coke. The trademarked red label is easily visible on the soda bottle. There’s also an engraving above of “Always Cool.”

The obverse of 2019 1 oz Proof Colorized Silver Fiji Coca Cola Coins includes the coat of arms for Fiji. The nation boasts a quartered shield flanked on either side by native figures. Above it is a traditional Polynesian sailing vessel and the coin includes the engravings of “Fiji 2019,” “1 oz,” “.999 Fine Silver,” and “2 Dollars.”

Please don’t hesitate to reach out to Silver.com with your questions when you buy silver. Our customer service team is available to you on the phone at 888-989-7223, online using our live chat, and via our email address.