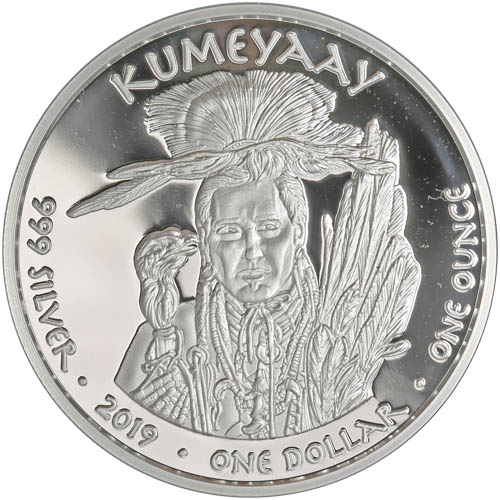 The latest issue in the Proof Native American Silver Dollar Series brings one of North America’s greatest predators to the popular and long-running collection. The Grizzly Bear is feared by nature lovers and outdoor enthusiasts for its size and unmatched power. Today, 2019 1 oz Proof Silver California Kumeyaay Grizzly Bear Coins are available to you online at Silver.com.

The Kumeyaay tribe originated in the extreme southwestern United States and northern Mexico. The historic range of the tribe primarily consists of the lands in southern California in the United States and throughout the Baja California peninsula in Mexico. However, members of the tribe once lived in other parts of northern Mexico off the Baja California peninsula as well. This divergence resulted in two distinct cultural traditions among the Kumeyaay, specifically the California Coast and Valley and the Desert traditions.

All 2019 1 oz Proof Silver California Kumeyaay Grizzly Bear Coins are available inside of individual protective capsules. The coins have a face value of One Dollar backed by the tribe, but as they are issued by the Native American Mint they do not possess legal tender value in the US. Only the United States Mint can strike legal tender coinage.

Each of the silver coins for sale in the Proof Silver Native American Dollar Series has a proof finish. These coins have frosted design sets overlaying mirrored background fields. The contrasting finishes help the eye separate the design sets from the background field with greater clarity.

On the reverse of 2019 Proof Silver California Kumeyaay Grizzly Bear Coins, you’ll find an adult grizzly guarding its young cub. The grizzly bear is a large member of the North American brown bears species. Though the grizzly was once commonly found throughout the Western United States and northern Mexico, today’s range features most grizzlies in Montana, Wyoming, and Idaho in the continental US, Alaska, and Canada’s western provinces.

The obverse of 2019 1 oz Proof Silver California Kumeyaay Grizzly Bear Coins includes the depiction of a Kumeyaay tribal member. Today, the Kumeyaay people number some 1,200 living on reservations and another 2,000 living off reservations.