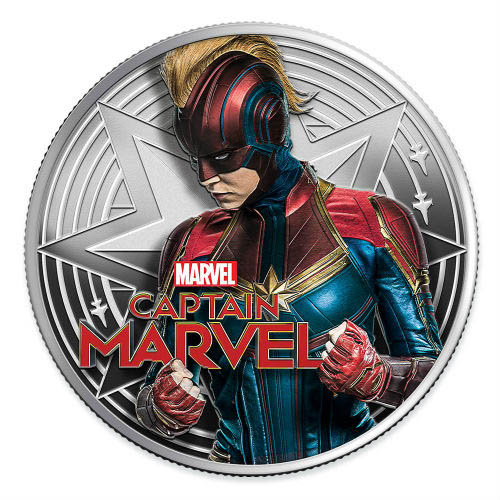 Each 2019 1 oz Proof Silver Fiji Captain Marvel Coin in this product listing comes to you in a unique presentation box. The tin box is larger and thinner than the typical presentation case as it includes a 2 Gram .999 fine silver Certificate of Authenticity. The COA is numbered with the individual serial number for the coin.

If you’re wondering what that means to be the Carol Danvers version, it might help to know that no fewer than seven versions of Captain Marvel have been used by Marvel Comics over the decades. Stan Lee’s original Captain Mar-Vell was actually an alien intelligence officer, while the 2012 introduction of the Carol Danvers storyline focuses on a female US Air Force officer granted incredible superpowers following a flight mission crash involving the test of an experimental lightspeed engine.

The obverse of 2019 Proof Silver Fiji Captain Marvel Coins includes the coat of arms for Fiji. This design offers a quartered shield with elements of Fijian life represented in all four quadrants. It is supported on either side by Fijian people and topped with a Polynesian sailing vessel.

If you have any questions about silver for sale, please contact Silver.com. You can call us at 888-989-7223, chat with us live online, or email us directly.