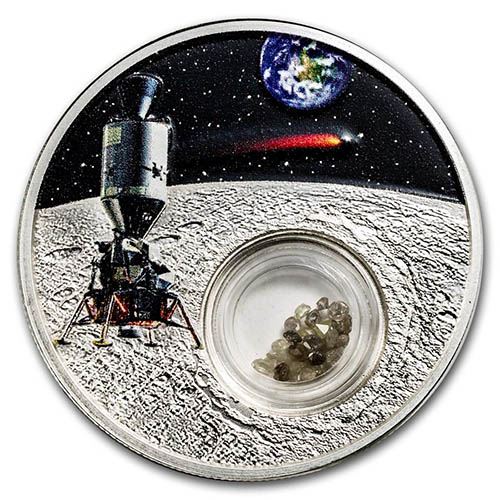 On July 16, 1969, the Apollo 11 mission command module and lunar lander lifted off from Earth at Cape Canaveral, Florida with a mission to take mankind to the Moon and bring the astronauts safely back to Earth. The mission fulfilled mandate set forth for the nation by President John F. Kennedy in 1961. The 2019 1 oz Proof Silver Mesa Grande 50th Anniversary Moon Landing Coin is currently available to you for purchase online at Silver.com.

The moon’s pockmarked surface is the result of countless strikes from passing meteorites and asteroids. When a meteorite comes into contact with the surface of the moon the extreme heat of the explosion creates thousands of tiny diamonds within the craters of the moon’s surface.

On the reverse side of 2019 Mesa Grand 50th Anniversary Moon Landing Coins is a depiction of the Apollo 11 command module with the lunar lander attached. The lower half of the field retains its original silver finish with the images of the moon’s surface. The rest of the background field is colorized with an image of Earth’s beautiful colors, the red-hot heat of a passing meteorite and the black depths of outer space. The twinkling stars in the background are left in their original silver as well to help foster a sense of twinkle from each one.

The obverse of 2019 1 oz Proof Silver Mesa Grande 50th Anniversary Moon Landing Coins features the image of a powerful bald eagle. The eagle was the name given to the lunar landing module with the astronauts uttering the famous words “the eagle has landed” as it touched down on the lunar surface.

We encourage all Silver.com customers to reach out to us with questions about silver for sale at 888-989-7223. You can also connect with us online through our live chat and email address features.