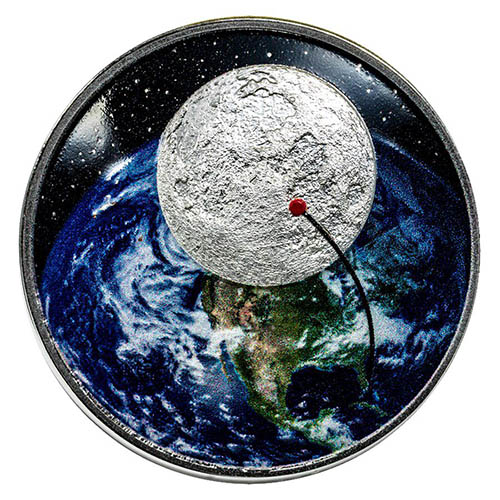 The Native American Mint celebrates the 50th anniversary of NASA’s successful moon landing in 1969 with a variety of silver coins issued with 2019 date marks. Among them is a new curved coin with the latest technology bringing proof finishes, colorized lacquer, and 3D visuals to capture the epic flight. Today, 2019 1 oz Proof Silver Jamul Moon Landing Curved Coins are available to you online at Silver.com.

The Jamul Sovereign Nation issues these coins with a face value of One Dollar. The coins were struck with 2019 date marks to commemorate the 50th anniversary of America’s decade-long endeavor to send men to the surface of the moon and return them safely to planet Earth. Though the coins have a nominal face value of One Dollar, they are not legal tender US Dollars. Only the United States Mint has the federal authority to issue such coinage.

All 2019 1 oz Proof Silver Jamul Moon Landing Curved Coins are available to you with a protective capsule around the coin itself. Each coin and capsule is housed within a commemorative box from the Native American Mint and includes a numbered Certificate of Authenticity with its serial number in the series of 5,000 coins.

On the obverse of 2019 Silver Jamul Moon Landing Curved Coins is a colorized depiction of planet Earth in the background with the North American Continent, and the United States, in central focus. There is a flight path that links the launch pad at Cape Canaveral, Florida, with the surface of the moon where the lunar lander Eagle touched down.

Buzz Aldrin and Neil Armstrong were the first people in human history to set foot on a different celestial body, and also the first to safely return from another planet. Armstrong and Aldrin spent a total of 21.5 hours on the moon’s surface collecting samples. The coins have a curved 3D surface to better highlight the beauty of the designs and the flight path of Apollo 11.

The reverse of 2019 1 oz Proof Silver Jamul Moon Landing Curved Coin includes the depiction of an American bald eagle landing on the moon’s surface clutching an American flag. Earth is visible in the distance. This design replicates, to a degree, the mission patch of the Apollo 11 astronauts.

Please feel free to reach out to Silver.com with questions. You can call us at 888-989-7223, chat with us live online, or simply send us an email.