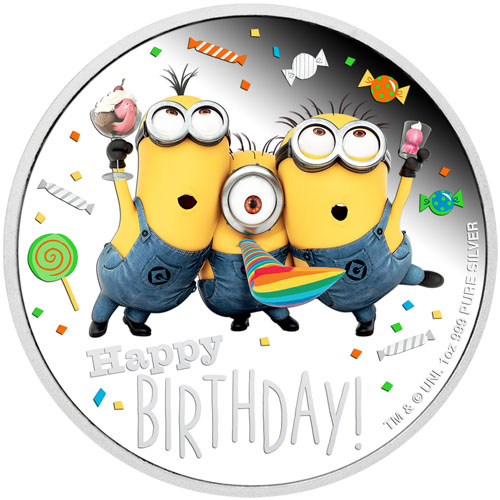 They’re evil. They’re lovable. Most importantly, they’re yellow! The minions are popular evil sidekicks featured in the Despicable Me franchise of animated feature films. With an unintelligible language all their own and a way of accidentally achieving their goals through buffoonery, the minions are too lovable to hold responsible when evil schemes come about. Today you can purchase 2019 1 oz Silver Niue Minions Happy Birthday Proof Coins online at Silver.com.

Minions debuted on the big screen as the evil henchmen serving evil mastermind Gru in the 2010 film Despicable Me. Since then, they’ve featured in two sequels to that film and earned their own feature film, Minions, in 2015. The latter film was a prequel that explained how the minions came to serve at the side of Gru.

All of these 2019 1 oz Silver Niue Minions Happy Birthday Proof Coins are perfectly packaged to give to the silver lover in your life for that big birthday. The silver coins are all individually housed inside of birthday card-themed packaging with the message “Happy Birthday” and name of the first movie the lovable henchmen appeared in.

The reverse of 2019 Silver Niue Minions Happy Birthday Proof Coins includes the image of the three primary minions featured in the films. Kevin, Stuart, and Bob are on this side in a colorized finish to help you or your loved one celebrate a “Happy Birthday.” The minions are all small, yellow henchmen shaped like pill capsules.

Minions were revealed to be as old as the beginning of life on Earth in the feature film Minions from 2015. Acting often as a large group, the minions have shown to be biologically wired to seek out and serve the evilest individual they can find. Gru is the man they serve beside in the three Despicable Me films.

On the obverse of 2019 1 oz Silver Niue Minions Happy Birthday Proof coins, you’ll find the fourth-generation effigy of Queen Elizabeth II. This right-profile portrait depicts the Queen wearing her crown and was released in 1998 by the Royal Mint of England and designed by Ian Rank-Broadley. It has featured on British and Commonwealth coins for nearly two decades now.

Please don’t hesitate to reach out to Silver.com with your questions. You can call us at 888-989-7223, chat with us live online, or simply send us an email with your inquiries.