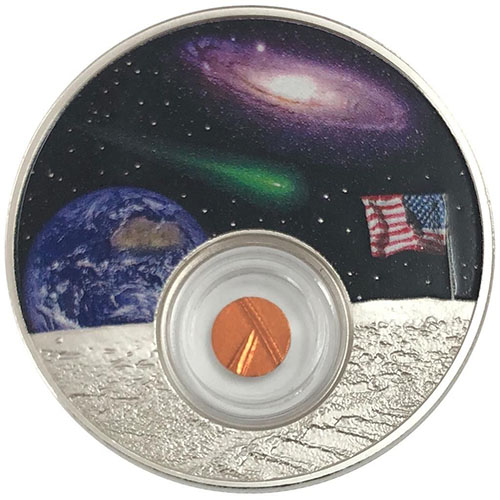 Americans Buzz Aldrin and Neil Armstrong had the distinct honor of being the first humans in history to leave the surface of planet Earth, land on another celestial body, and return safely to the planet. 2019 marks the 50th anniversary of this landmark accomplishment. Right now, 2019 1 oz Silver Niue Moon Landing 50th Anniversary Proof Coins are available to purchase online at Silver.com.

Each 2019 1 oz Silver Niue Moon Landing 50th Anniversary Proof Coin is available to you with a protective black box from the Native American Mint and CoinJewels. The coins come with a numbered Certificate of Authenticity reflecting their serial number in the limited issue of 5,000 coins in total.

These 2019 Silver Niue Moon Landing 50th Anniversary Proof Coins feature an inset capsule with a small piece of copper. This is no ordinary piece of copper. Each fleck of copper in the capsule of these coins came directly from the Statue of Liberty during a 1985 renovation of the statue. The copper was made into two small replicas of Liberty which were later flown into space aboard the space shuttle Discovery in 1985.

On the reverse of 2019 1 oz Silver Niue Moon Landing 50th Anniversary Proof Coins is the image of the lunar surface in the foreground with a bright red-white-and-blue American flag planted on the Moon. In the distance, the colors of the cosmos come to life with another galaxy, a streaking comet, and planet Earth. The copper in these insets came from one of the two replica statues that was later broken down into Liberty centennial seals.

The obverse of 2019 Silver Niue Moon Landing features the right-profile portrait of Queen Elizabeth II. Her Majesty is depicted here in the fourth-generation design from Ian Rank-Broadley and the Royal Mint of England.

If you have any questions about these silver coins for sale, please don’t hesitate to ask. Silver.com customer service is available to you at 888-989-7223, online using our live chat service, and via our email address feature.