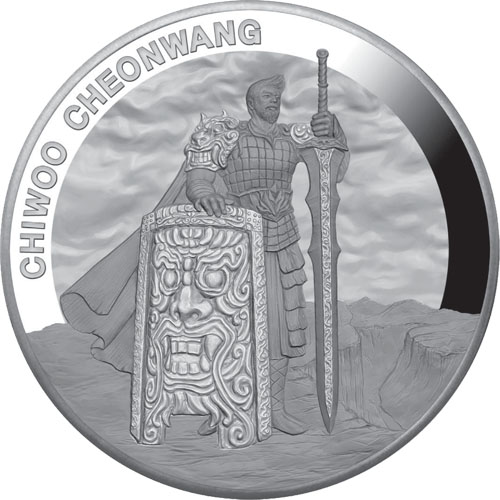 For those who buy silver from South Korea’s KOMSCO, the leading option is the Chiwoo Cheonwang Series. This gold and silver bullion lineup includes investment-grade bullion medals and proof collectible options. The Proof Silver Chiwoo Cheonwang has the same design elements as its bullion counterpart, but with much lower mintage figures and distinctive packaging. The 2019 1 oz Proof Silver South Korean Chiwoo Cheonwang Medal is now available to you for purchase online at Silver.com.

Silver Chiwoo Cheonwang Medals feature a new design element on the reverse side each year. KOMSCO refers to its design concepts as progressive, indicating that each one follows Chiwoo Cheonwang along a broader story arch as he prepares for battle, rides into the fight with his warriors, and in this latest issue, surveys his hard-fought gains.

The debut issue featured Chiwoo standing with his full battle regalia on. The 2017 release captured Chiwoo as he mounted his horse to prepare for the fight. The 2018 release depicted Chiwoo as many of his enemies no doubt last caught a glimpse of him. He rode into battle with a determined look on his face and his sword leveled ready to take down any opponent in his path.

On the reverse of the 2019 1 oz Proof Silver South Korean Chiwoo Cheonwang Medal is a more restrained image of the famed God of War. Chiwoo is shown standing on a rocky plateau as he looks out over the battlefield. He has his helmet removed, offering your first real glimpse of the “man” behind the myths. His sword stands point down to the ground with his left hand clutching it as his shield rests at his side under his right hand.

The obverse of 2019 Proof Silver Chiwoo Cheonwang Medals includes the familiar image of Do ggae bi. The grotesque feature was included on Chiwoo’s battle shield to strike fear in his enemies on the field of battle, and was often hung from roofing tiles by Korean people to ward off evil spirits in the home.

We encourage Silver.com customers to call us with questions at 888-989-7223. If you’d like to connect with us online, we’re available through our live chat and email address as well.