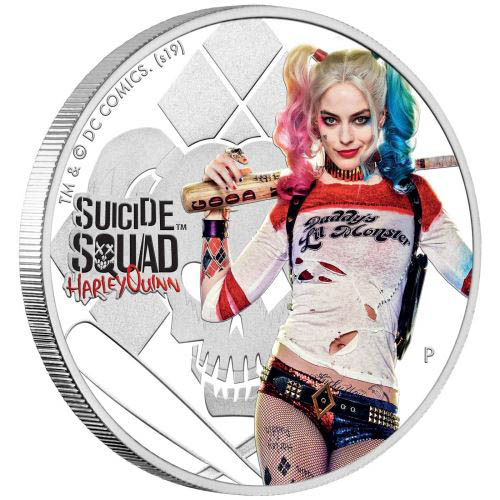 Marvel Comics and DC Comics have been battling for consumer dollars at the box office for most of the 21st century, with Marvel enjoying immense success. The Dark Knight franchise was DC Comics’ strongest entry and after its conclusion some of Batman’s greatest enemies featured in the 2016 film Suicide Squad. You’ll now find the characters from this motley crew on silver coins from Perth Mint. The 2019 1 oz Silver Tuvalu Suicide Squad Harley Quinn Proof Coin is currently available to purchase online at Silver.com.

The Suicide Squad is the exact opposite of Marvel’s Avengers. This crew of supervillains first appeared in DC Comics’ September 1959 release of The Brave and the Bold #25. A second version of the group appeared in January 1987 as a modern depiction created by John Ostrander. In the Harley Quinn Proof Coin release, we’re introduced to Dr. Harleen Quinzel.

A doctor at Arkham Asylum before she crossed over into the world of evil, Dr. Quinzel was infatuated with the insanity of Batman’s greatest nemesis: The Joker. During his time in Arkham, the Joker was able to turn Dr. Quinzel toward madness and she became known as Harley Quinn and often dressed in harlequin costumes. Athletic and agile, she was dangerously unpredictable in a fight and that made her a formidable opponent.

On the obverse of 2019 Silver Tuvalu Suicide Squad Harley Quinn Proof coins is Ian Rank-Broadley’s effigy of Queen Elizabeth II. Her Majesty’s right-profile portrait here is a very regal design and depicts the Queen with her name, the nation of issue, face value, date mark, and the coin’s weight, purity, and metal content.

These 2019 1 oz Silver Tuvalu Suicide Squad Harley Quinn Proof Coins are housed inside of iconic Perth Mint display cases with clear lids so you can view the reverse design without even opening the case. The case itself is housed in a Suicide Squad-themed shipper with colorized imagery and the coins come with a Certificate of Authenticity.

We encourage Silver.com customers to call us with questions at 888-989-7223 when they buy silver. You can also connect with us online through our live chat and email address features.