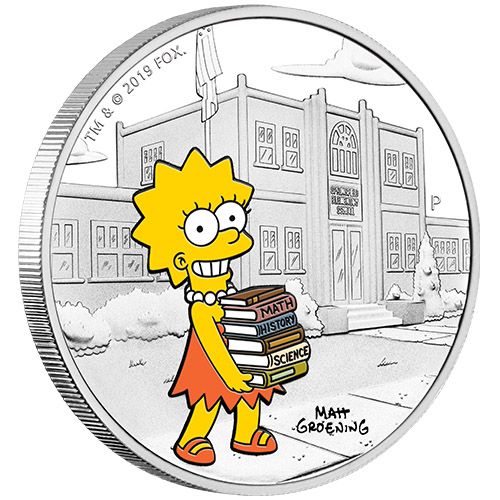 The silver coins for sale in The Simpsons Series from the Perth Mint include limited mintage figures and focus on the five main characters in the Simpsons family. The debut coin featured Homer, followed by the eldest child Bart and then the family matriarch, Marge. In the fourth release, the middle child and brains of the family is depicted. Today, 2019 1 oz Silver Tuvalu The Simpsons Lisa Proof Coins are available to you online at Silver.com.

The Simpsons is now the longest-running scripted TV show in television history. What started as 30-second shorts on The Tracey Ullman Show grew into its own 30-minute animated series on FOX. The show features a broad cast of characters, but every episode focused on the antics and misadventures of the Simpson family.

All 2019 1 oz Silver Tuvalu The Simpsons Lisa Proof Coins are available to you in distinctive packaging. The Perth Mint houses each coin individually inside of a clear acrylic case that allows the viewer to see both the obverse and reverse design with the coin on display and not have to remove it from its protective packaging. A stylized Simpsons-themed shipper with the artwork of various cast members on it is included with purchase, along with a numbered Certificate of Authenticity.

The obverse of 2019 Silver Tuvalu The Simpsons Lisa Proof Coins includes an effigy of Queen Elizabeth II. This is the fourth-generation right-profile portrait of Her Majesty from the Royal Mint of England. It was created in 1998 by Ian Rank-Broadley and was widely used for more than 20 years on British, Australian, and Commonwealth coins.

On the reverse of 2019 1 oz Silver Tuvalu The Simpsons Lisa Proof Coins is a colorized image of Lisa Simpson. She is depicted with a tall stack of books in her hands and her school, Springfield Elementary, in the background. Lisa’s figure is in full color with her red dress, red shoes, and white pearl necklace.

Please don’t hesitate to contact Silver.com with your questions. You can call our customer service team at 888-989-7223, chat with us live online, or simply send us an email with your inquiries.