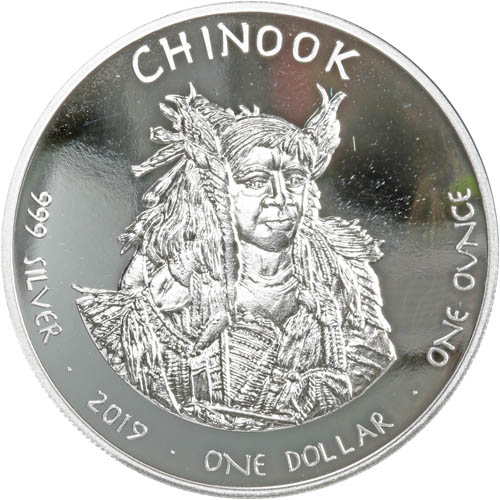 The silver coins for sale in the Native American Mint’s Proof Silver Dollar Series are diverse in design. Each unique design represents a specific state and the indigenous tribes that originally inhabited that region of the country. Additionally, the reverse design field offers a depiction of an animal species commonly found in that area. Right now, 2019 1 oz Proof Silver Washington Chinook Marmot Coins are available to purchase online at Silver.com.

Each individual 2019 1 oz Proof Silver Washington Chinook Marmot Coin is available to you with its own protective plastic capsule. These coins are in brand-new condition from the Native American Mint and feature proof visuals. These include frosted design elements contrasting mirrored background fields.

The Proof Silver Dollar Series from the Native American Mint issues One Dollar face values to each coin with the backing of the representative indigenous tribe. However, under federal law in the United States, only the United States Mint can produce legal tender coinage. Though federally recognized tribes are sovereign nations, none can produce coins with legal tender status.

The Chinook people were among the last to encounter European-American settlers pushing west after the Revolutionary War. When President Thomas Jefferson concluded the Louisiana Purchase from France, his Corps of Discovery unit from the US Army led by Meriwether Lewis and William Clark encountered the Chinook along the Lower Columbia River when the Corps reached the Pacific coast.

For the reverse field of 2019 Proof Silver Washington Chinook Marmot Coins, the Native American Mint offers a depiction of the marmot. The marmot is a large member of the squirrel genus that looks similar to a beaver. These large rodents have short, robust legs and are split into 15 distinct species.

If you have any questions, please reach out to Silver.com. We are available to assist you at 888-989-7223, online using our live chat, and via our email address.