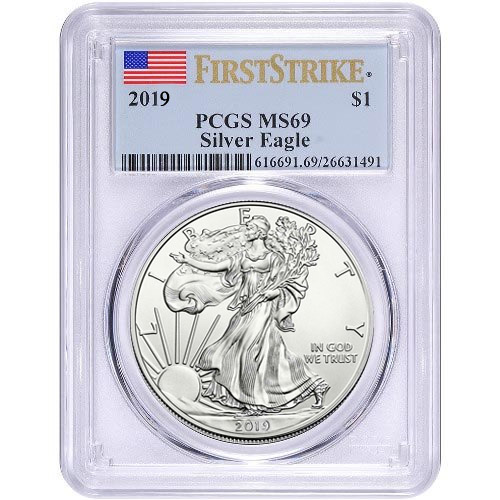 Silver American Eagle Coins were first struck by the US Mint at its San Francisco Mint facility beginning in late 1986. The bullion coins were issued there from 1986 to 1998. In 1999 and 2000, the Silver Eagles were issued by the Philadelphia Mint. Since 2001, the West Point Mint has handled the production of the bullion Silver Eagles.

All 2019 1 oz Silver American Eagle Coins in this listing are available to you in near-perfect condition. The coins in this listing have a Mint State 69 certification indicating the presence of full, original mint luster and a maximum of two minor detracting flaws. The coin’s flaws are limited to minuscule contact marks or hairlines.

As a First Strike specimen, these coins are certified by the PCGS to have arrived within a set timeframe. The coins must arrive within 30 days of the initial issue from the United States Mint to earn the FS label.

On the obverse side of the 2019 1 oz Silver American Eagle is the image of Walking Liberty. The design featured here was created in 1916 by Adolph A. Weinman. It depicts Liberty wearing the American flag around her shoulders and walking toward the sun on the horizon.

The reverse of 2019 Silver American Eagles features the heraldic eagle of the United States. This design has been in use on American coinage since 1794 and was modernized for these coins by John Mercanti in 1986.

Please feel free to reach out to Silver.com with your questions when buying silver. You can call our customer service team at 888-989-7223, chat with us live online, or simply send us an email with your inquiries.