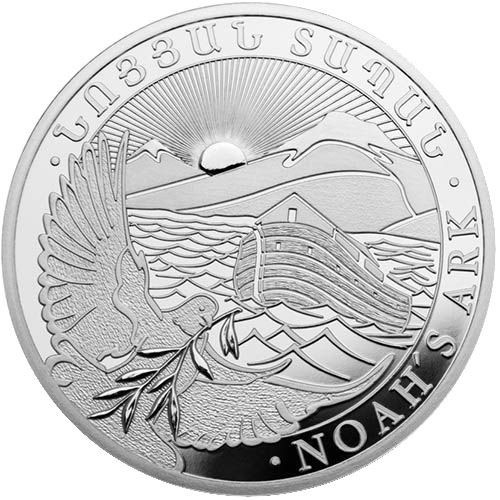 On the reverse of the 2019 1 oz Silver Armenian Noah’s Ark Coin is the design of an ark as it floats on flood waters that have engulfed the planet. It is said that God sent 40 days and 40 nights of rain to engulf the world and wash away mankind and the sins of humanity. Noah and his family were the only humans to survive, along with two of every kind of creature from the planet.

Mount Ararat is depicted in the background of the Silver Noah’s Ark coin design. Mount Ararat was within the historical boundaries of Armenia, but when the nation was split between Turkey and the Soviet Union following World War I, the whole of the mountain fell within the boundaries of a newly formed Turkish state.

The obverse of 2019 Silver Armenian Noah’s Ark Coins features the design of the nation’s coat of arms. In the center of the Armenian heraldic shield is a depiction of the ark resting on the peak of Mount Ararat. The larger shield itself is supported by an eagle and lion behind its figure.

Please feel free to reach out to Silver.com with questions. You can call us at 888-989-7223, chat with us live online, or simply send us an email with your inquiries.