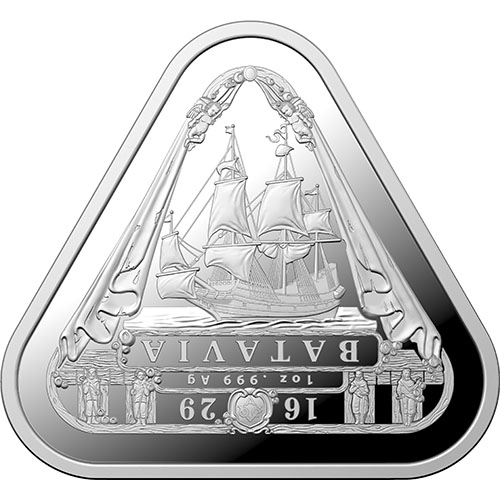 Reefs around the world have often proven deadly for sailors throughout the course of human history. The reefs around the Australian continent have taken their fair share of ships down, including the reefs along Houtman Abrolhos off the coast of Western Australia. The Batavia is the most famous shipwreck on this reef and it capsized there in 1629. The 2019 1 oz Silver Australian Shipwreck Batavia Coin is the first in a new Royal Australian Mint series and is available to you for purchase online at Silver.com.

The Batavia was commissioned by the Dutch East India Company as its flagship in 1628. In October 1628, it set off for the capital city of the Dutch East Indies laden with silver and gold to collect spices. The ship’s first officer and a junior officer had no intention of returning to Amsterdam though, steering the ship off course on purpose after rounding the Cape of Good Hope.

The two men wanted to use the silver and gold to start a new life away from Amsterdam and prosecution that awaited them there for heretical beliefs. The two gathered other crew members and passengers to participate in their mutiny, but by the time the ship approached Western Australia the mutiny was falling apart and the ship struck a reef, capsizing quickly.

On the reverse of 2019 1 oz Silver Australian Shipwreck Batavia Coins, you’ll find the Batavia as it appeared when it left the docks in Amsterdam for the city of Batavia in the Dutch East Indies, the modern-day city of Jakarta. If you flip the coin, the date of sinking, the ship’s name, and the coin’s weight, purity, and metal content are readable while the Batavia is featured capsized.

The obverse of 2019 1 oz Silver Australian Shipwreck Batavia Coins includes a bust of Queen Elizabeth II from Jody Clark at the top of the design field. Below her, a scene of chaos plays out. Following the capsizing, 40 crew and passengers drowned trying to get to shore. Among the remaining survivors of the sinking, 110 men, women, and children were killed by mutineers after the ship’s captain had left with a small party in search of food and fresh water for the survivors.

We encourage Silver.com customers to contact us with questions about buying silver at 888-989-7223. You can also connect with us online through our live chat and email address features.