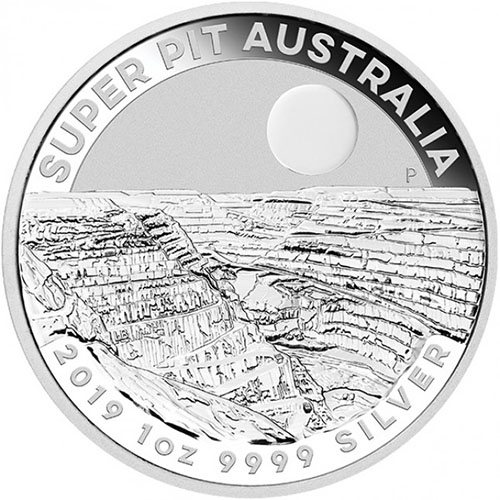 Australia is home to some of the largest open pit mines in the world. One of them, colloquially known as the Super Pit, was the nation’s largest open cut gold mine until 2016. Located in Kalgoorlie, Western Australia, the Fimiston Open Pit is an icon in Australia and now appears in a commemorative issue of gold and silver for sale from the Perth Mint. Now, 2019 1 oz Silver Australian Super Pit Coins are available to you for purchase online at Silver.com.

The Fimiston Open Pit is the formal name for one of Australia’s largest open cut gold mines. It is colloquially known as the Super Pit because of its massive size and production levels. The Super Pit is 3.5 km long, 1.5 km wide, and reaches down 600 m. Some 700,000 ounces of gold is extracted from the Super Pit on an annual basis.

The Super Pit was first started in 1893. In its early decades, the pit was little more than a collection of underground mines and tunnels. It would take decades for mining companies to come together to transform the pit into an open pit mine capable of extracting greater volumes of gold.

On the reverse of 2019 1 oz Silver Australian Super Pit Coins is the image of the Super Pit. Its vast rows of roads reaching down into the pit itself are displayed in this design as the sun rises over the rim of the pit in the distance. The image itself was created for this release by Lucas Bowers. The Perth Mint includes an authentication feature on this side of the coin. There is a micro-laser engraved letter within the inscription of “Australia” that is only visible under magnification.

The obverse of the 2019 Silver Australian Super Pit Coin includes the portrait of Queen Elizabeth II. Based on Jody Clark’s fifth-generation portrait for the Royal Mint of England, this is the sixth-generation image for Australian coinage and was created by Jody Clark with the Queen’s neckline and shoulders included. This design began to feature on Australian bullion coins starting with 2019 date marks, replacing Ian Rank-Broadley’s long-running 1998 design.

These 2019 1 oz Silver Australian Super Pit Coins are offered today in Brilliant Uncirculated condition. The coins are available in clear tubes of 25 or Monster Boxes of 250 with 10 tubes to a box.

We encourage Silver.com customers to call us with questions at 888-989-7223. You can also connect to us online through our live chat and email address features.