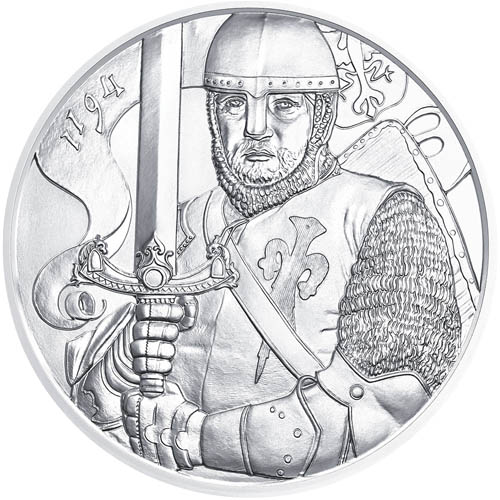 Following the conclusion of the Third Crusade, Duke Leopold V exacted revenge on fellow crusade commander King Richard I of England by imprisoning him and his forces as they transited Europe back to England. Richard the Lionheart was forced to pay Leopold V 15 tonnes of silver for his freedom, and 825 years ago Leopold V put that money to good use. Today, 2019 1 oz Silver Austrian 825th Anniversary Leopold V Coins are available to you online at Silver.com.

Duke Leopold V was one of three major Western commanders to lead Christian forces into the Holy Land during the Third Crusade. Leopold V led a force of German mercenaries and soldiers, but arrived late to the siege of Acre. Completing the siege and taking the city first were England’s King Richard I and France’s King Phillip II. When asked for his fair share of the spoils, Leopold V was denied by Richard the Lionheart as the German and Austrian forces did not arrive in time to participate in the battle.

All 2019 1 oz Silver Austrian 825th Anniversary Leopold V Coins are available in Brilliant Uncirculated condition. The coins are yours to purchase in either protective plastic, mint tubes of 20 coins, or monster boxes of 500 coins. Each one is issued with a 2019 date mark, 825 years following the founding of the Austrian Mint.

On the obverse of 2019 Silver Austrian 825th Anniversary Leopold V Coins is the image of a crusader on horseback riding into battle. The engravings on this side are in German and include the nation of issue, face value, year of issue, metal content, and weight.

Leopold V imprisoned Richard the Lionheart and his forces as a measure of revenge for the insult he felt was delivered to him in the denial of spoils following the fall of Acre. Leopold V used that silver to found the Austrian Mint in Vienna and build the stronghold of Wiener Neustadt.

The reverse of 2019 1 oz Silver Austrian 825th Anniversary Leopold V Coins includes the image of Leopold V ready to lead his forces into battle. Leopold V wears his full battle armor and wields his sword ready to cut down any enemy combatants.

Please feel free to reach out to Silver.com with questions about our silver for sale. You can call our customer service team at 888-989-7223, chat with us live online, or email us directly.