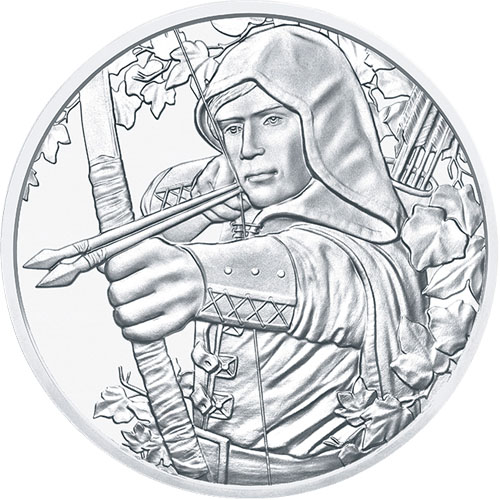 Robin Hood is one of the most revered outlaws in human history and his supposed deeds are etched permanently in the culture of Britain. Whether or not he actually existed is up for debate, but his first appearance in ballads from the Middle Ages date to the late-13th century and early 14th century. Right now, 2019 1 oz Silver Austrian 825th Anniversary Robin Hood Coins are available to purchase online at Silver.com.

Each individual 2019 1 oz Silver Austrian 825th Anniversary Robin Hood Coin in this listing is in Brilliant Uncirculated condition. The coins are housed individually inside of protective plastic flips, in multiples of 20 in mint tubes, or in Monster Boxes of 500 coins. The Monster Box contains a total of 25 tubes of 20 coins.

The Robin Hood coin is the third in the three-coin silver bullion series celebrating the 825th anniversary of the founding of the Austrian Mint. His origin stories vary in English history with some suggesting he had noble birth while others suggest he was a famed crusader who fought alongside Richard the Lionheart during the Third Crusades. Regardless of the retelling, Robin Hood is said to have exceptional archery and sword skills.

On the reverse of the 2019 1 oz Silver Austrian 825th Anniversary Robin Hood Coins is a depiction of Robin Hood as he draws back his bow with two arrows set to fire. Robin Hood is believed to have pushed back against the overreach of Prince John and the Sheriff of Nottingham in the absence of King Richard I. In most retellings, he fights the over-taxation of English people by robbing the rich to give back to the poor.

The obverse of 2019 Silver Austrian 825th Anniversary Robin Hood Coins includes a common design used throughout the series. The image here is that of one of Leopold V’s crusaders riding on horseback. He bears a shield with Leopold’s heraldic symbol on it and carries the battle standard of Leopold V’s army.

If you have any questions, please feel free to contact Silver.com. Our customer service team is available at 888-989-7223, chat with us live online, or send us an email.