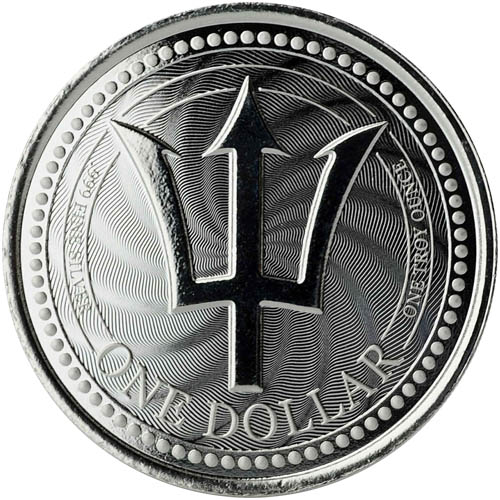 The Scottsdale Mint has issued a variety of gold and silver bullion coins for Caribbean nations since 2017, but few have proven as popular with investors and collectors as the Silver Barbados Trident. With low mintage figures at 30,000 per release and .999 fine silver, these exceptional coins are becoming a must-have for those looking to add various silver bullion coins to their holdings. Now, 2019 1 oz Silver Barbados Trident Coins are available to purchase online at Silver.com.

Barbados is a Caribbean island in the southern Caribbean Sea where the region meets the Atlantic Ocean. The island nation has a long history in the production of sugar cane and rum, staples of the region as a whole. A British territory for centuries, Barbados gained its independence from Great Britain in 1966.

Among the imagery used on the Silver Barbados Trident Coins are several nods to the history of the nation and its historic break from Great Britain. Most notable among these symbols is the trident head, part of a real-life tool that was once believed by the Ancient Greeks to give Poseidon the power to control the seas and oceans of the world. In fact, you’ll find three trident heads on these coins.

On the obverse side of 2019 1 oz Silver Barbados Trident Coins is the official coat of arms for the nation. The flowers in the upper corners of the shield are the national flowers and known simply as the Pride of Barbados. The tree in the center-bottom is the bearded fig tree. A dolphin fish supports the shield on the left and a pelican on the right. The helmet that tops the shield has a hand reaching up from it clutching two sugar cane stalks that represent the staple crop of the island for centuries.

The reverse of 2019 Silver Barbados Trident Coins includes the singular trident head in the center of the coin design. This is the same symbol as depicted on the national flag for Barbados and the fact that it is broken from the shaft represents the island’s break from British rule in 1966.

These 2019 1 oz Silver Barbados Trident Coins are available to you in Brilliant Uncirculated condition with individual protective plastic capsules. The coins include the trident head on the reverse, as well as two smaller trident heads on the obverse under the split “20” and “19” date mark. Both sides have beaded border designs. The 2019 coins have the waving lines used on the 2017 coins, but not the 2018 coins. The obverse background field has a brushed finish.

We encourage Silver.com customers to call us at 888-989-7223 with questions about silver for sale. You can also contact us on the web using our live chat and email address.