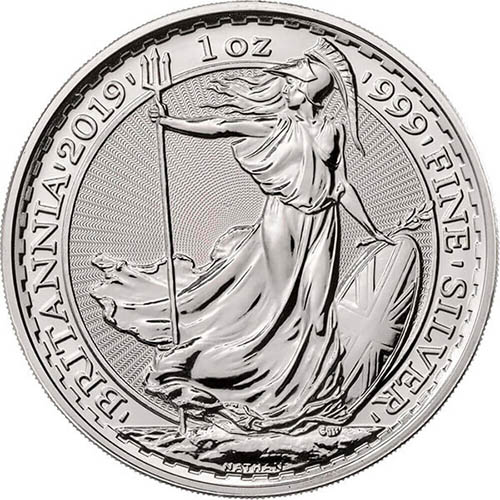 One of the most popular silver bullion coins from the European continent is the Silver Britannia coin. Issued by the Royal Mint of England since 1997, the coin’s prominence has grown over the last two decades and today it stands among the other major sovereign bullion coins as a shining example of its people. The 2019 1 oz Silver British Britannia Coin is currently available to you for purchase online at Silver.com.

The Silver British Britannia Coin debuted in 1997 and features the same reverse design element introduced in 1987 on the Gold Britannia. Philip Nathan’s design of Britannia revamped the vision of Britannia used on previous coinage and delivered a more powerful figure of Britannia for the coin series.

When the Silver Britannia debuted in 1997 it featured .925 silver content, a purity level which was maintained through 2012. As of the 2013 release of the coins, the Royal Mint has increased the silver purity to .999 fine silver content.

On the reverse of 2019 1 oz Silver Britannia Coins is the image of Britannia. Though she is now viewed as a female personification of Britons, the name and her figure have evolved over time. Originally, Britannia was the result of a translation of the original Roman name for the province following its conquest. Later, Britannia was viewed as a goddess protecting the British Isles.

Nathan’s design on the reverse capitalizes on that later interpretation. She is depicted standing along the coast of the southern reaches of the British Isles. She looks out over the English Channel with a Corinthian helmet on, a trident in her right hand to control the seas, and a shield with the Union Jack in her left hand to defend the homeland.

The obverse of 2019 Silver British Britannia Coins features the fifth-generation effigy of Queen Elizabeth II. Designed by Jody Clark, this design is a right-profile portrait and depicts the Queen wearing the Royal Diadem crown.

These 2019 1 oz Silver British Britannia Coins are available in Brilliant Uncirculated condition. The coins are offered individually inside of protective packaging, in multiples of 25 shipped in mint tubes, or Monster Boxes of 500 coins housed in 20 tubes.

We encourage Silver.com customers to call us at 888-989-7223 with questions. You can also reach out to us online through our live chat service and email address features.