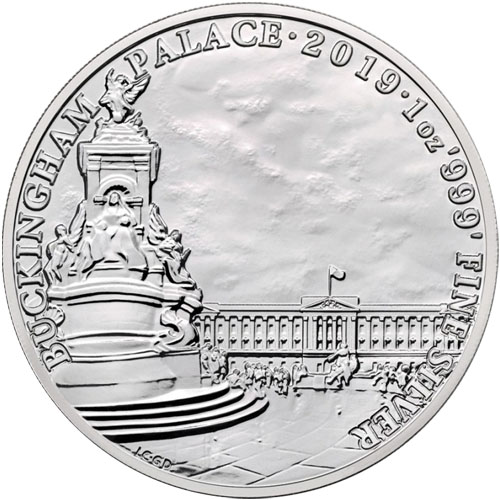 The Landmarks of Britain Series from the Royal Mint concludes in early 2019 with the release of the 2019 date marked Buckingham Palace coins. Today, Buckingham Palace is well known around the globe as the residence of the Royal Family of England when the monarch is in the national capital. Right now, 2019 1 oz Silver British Buckingham Palace Coins are available to purchase online at Silver.com.

Buckingham Palace was originally built in 1703 for the Duke of Buckingham as a townhouse in the city of London. The land on which the property was built had been in private hands for more than 150 years prior to the construction of Buckingham House, but in 1761 the site and structure were purchased by King George III for his Queen Charlotte and became known as the Queen’s House.

On the reverse of 2019 1 oz Silver British Buckingham Palace Coins is the image of Buckingham Palace as viewed from afar. In the design, you can see the East Front of the building which is used for many public appearances by the Royal Family. You can also see the palace garden that is the largest private garden in London.

The obverse of 2019 Silver Buckingham Palace Coins features the right-profile portrait of Queen Elizabeth II. Her Majesty is featured here in a fifth-generation design on British coinage. It was created in 2015 by Jody Clark and features the Queen wearing the Royal Diadem crown. This design has appeared on all British coins with 2016 and later date marks.

The Landmarks of Britain is a four-coin series from the Royal Mint of England. Each silver bullion coin design has a limited mintage of only 50,000 and captures images of distinct landmarks across the city of London. Prior releases include Big Ben, Tower Bridge, and Trafalgar Square.