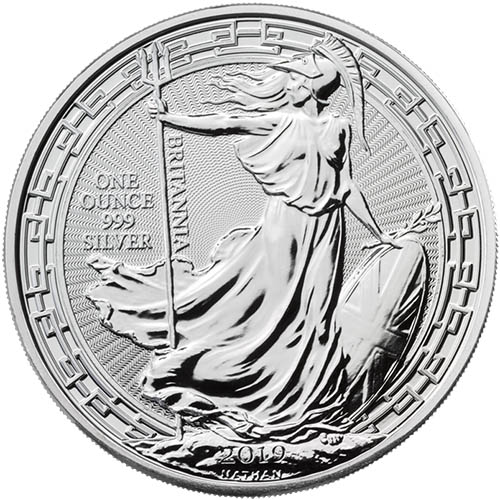 One of the most popular silver coins for sale is the Silver Britannia coin from the Royal Mint of England. First issued in 1997, these silver bullion coins feature the same modern image of Britannia on the reverse each year and the effigy of Queen Elizabeth II on the obverse. In a special design element offered first in 2018, the Royal Mint of England strikes low-mintage Britannias with an oriental border design theme. Right now, 2019 1 oz Silver British Oriental Border Britannia Coins are available to purchase online at Silver.com.

Each of the 2019 1 oz Silver British Oriental Border Britannia Coins available to you online at Silver.com comes in Brilliant Uncirculated condition. The coins in this low-mintage release are housed inside of individual protective plastic capsules. Each one features a distinctive oriental border design reminiscent of the British Trade Dollars.

The concept of British Trade Dollars arose from British conquests in the Far East and the establishment of colonies in Singapore (1819) and Hong Kong (1842). The trade dollars were issued by Royal Mint facilities established in the Bombay and Calcutta with Britannia on one side and an oriental border theme on both surfaces. Trade dollars were issued to minimize colonial reliance on foreign currencies and were not demonetized by Britain in 1937.

On the obverse side of 2019 1 oz Silver British Oriental Border Britannia Coins is the image of Queen Elizabeth II. Her Majesty is depicted here in right-profile relief in a fifth-generation design created by Jody Clark in 2015. It features the Queen at age 89 wearing the Royal Diadem crown.

The reverse face of 2019 Silver British Oriental Border Britannia Coins features the modern image of Britannia. Created by Philip Nathan in 1987 for the Gold Britannia, it depicts Britannia as a powerful figure with incredible resolve as she withstands gale-force winds to stand guard at the southern coast of Britain.

The Royal Mint issues these coins with a unique oriental border design. In the background field of the obverse is a guilloche design element similar to braided ribbons. The Royal Mint was formally established in the early 9th century and has been striking British coins for more than 1,100 years.

If you have any questions, contact Silver.com. Our customer service team is available to you at 888-989-7223, online using our live chat, and via our email address.