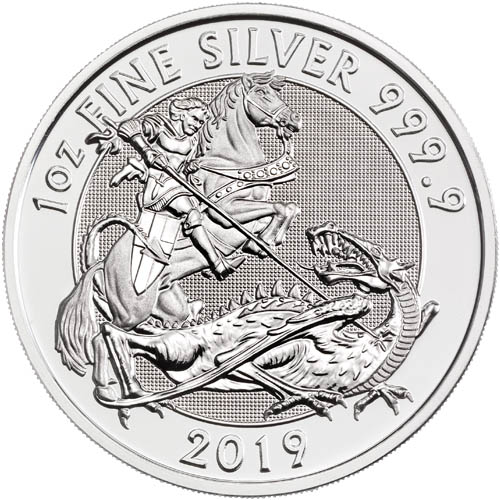 The Silver Valiant coin from the Royal Mint of England is one of the English mint’s newest pieces of silver for sale. The design of St. George featured on these coins debuted on 2018 date marked 10 oz silver coins and were released in that same weight again in 2019. Today, the 2019 1 oz Silver British Valiant Coin makes its debut and is available to you online at Silver.com.

The tale of St. George slaying the dragon serves as a launching point for any number of other cultural stories and fairy tales told throughout Europe over the course of the last several hundred years. The key elements in the story of St. George’s death-defying battle with the dragon persist in many fairy tales. A brave knight summons the audacity to face an overwhelmingly powerful dragon to save a helpless damsel and somehow finds the will to win.

All 2019 1 oz Silver British Valiant Coins in this listing are available to you in Brilliant Uncirculated condition. The 1 oz silver coins in this series are offered with individual protective plastic capsules to house the coins.

England holds St. George as the patron saint of the nation. His image features on the reverse of none other than the Great Britain Gold Sovereign coins that have been issued by the Royal Mint since 1817. He now comes to this series of silver coins from the Royal Mint in a new design.

The reverse of the 2019 1 oz Silver British Valiant Coin has a depiction of St. George on horseback. While designs of St. George on British coinage vary, this one captures a valiant image of St. George. He wears only light armor over his torso and has no helmet on. Look closely and you’ll see his shield, with the cross that has become known as the Cross of St. George on it, resting at his side. He has no intention of going on the defensive. He rides at the dragon and slays it with a long spear thrust through the neck of the beast.

On the obverse of 2019 Silver British Valiant Coins is the effigy of Queen Elizabeth II. Her Majesty features here in the fifth-generation right-profile portrait from Jody Clark. The background field on this side includes the guilloche appearance found on all British bullion coinage as an added security feature as of 2018.

Please feel free to reach out to Silver.com with your questions. Don’t hesitate to call us at 888-989-7223, chat with us live online, or email us directly.