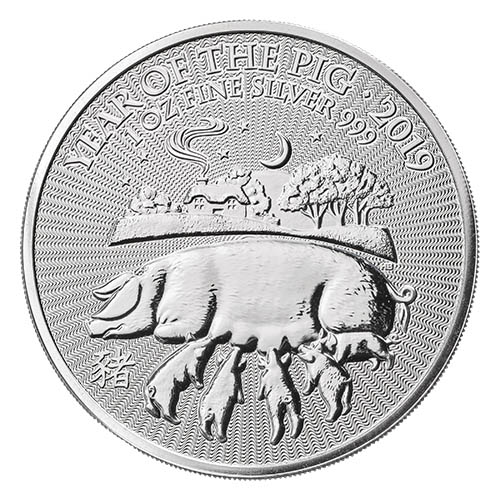 Silver buyers who covet lunar-themed collections have a lot of options to select from when buying silver, and the British Shengxiao Series is among them. Launched in 2014, the British Lunar Series marks its midway point with the release of the 2019 Year of the Pig Coins. Right now, 2019 1 oz Silver British Year of the Pig Coins are available to purchase online at Silver.com.

Each of the 2019 1 oz Silver British Year of the Pig Coins available to you at Silver.com comes in Brilliant Uncirculated condition. The coins are housed inside of individual protective capsules or within rolls of 20 coins. Each individual coin is available to you, including the bulk rolls, in BU condition.

The 2019 Silver Year of the Pig is the sixth issue in the 12-coin Shengxiao Series. The British Lunar Series from the Royal Mint launched in the middle of the 12-year cycle of the Chinese lunar calendar, which traditionally runs from the Year of the Rat to the Year of the Pig, with the current cycle starting back in 2008 and concluding now in 2019.

On the reverse side of 2019 1 oz Silver Year of the Pig Coins from the Royal Mint is a new design from Wuon-Gean Ho. The lone designer in the Shengxiao Series to date, Ms. Ho has developed a new image for the Year of the Pig. This image includes a female sow in the foreground feeding her four little piglets. The background captures a rural scene from England with a small cottage surrounded by trees and a starry night sky overhead.

The obverse of 2019 1 oz Silver British Year of the Pig Coins bears the fifth-generation effigy of Queen Elizabeth II. Her Majesty has featured on British coinage since 1953 when she was crowned Queen of England. This fifth-generation design from Jody Clark debuted on 2016 date marked coins and continues now on British coins, as well as a growing number of Commonwealth nations.

If you have any questions about the silver coins of the Shengxiao Series, please don’t hesitate to ask. Silver.com customer service is available to you at 888-989-7223, online using our live chat, and via our email address.