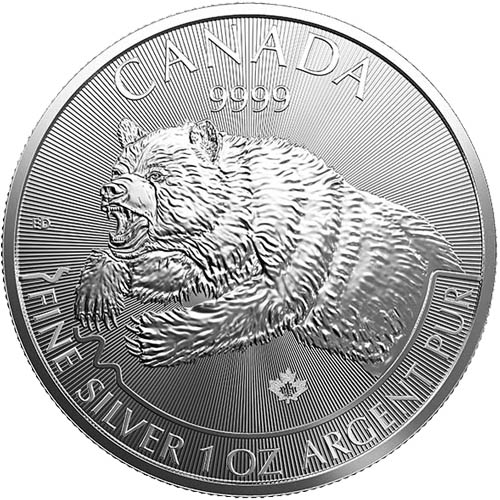 It is hard to match the quality of the silver bullion coins from the Royal Canadian Mint. Not only does Canada’s sovereign mint produce some of the finest coin designs in the world, but most of its silver bullion coins are also produced on .9999 fine silver blanks. Modern issues from the mint also boast some of the latest security features to protect your investment. Now, 2019 1 oz Silver Canadian Grizzly Predator Series Coins are available to you for purchase online at Silver.com.

The Silver Canadian Predator Series was introduced by the Royal Canadian Mint in 2016. The four-coin series features 1 oz silver blanks with .9999 fine silver content. The original issue’s mintage was 1 million coins in total, but the remaining three saw the mintage slashed in half to 500,000 coins.

Emily Damstra is the designer for three of the four reverse images in the Silver Predator Series from the Royal Canadian Mint, including these 2019 Silver Canadian Grizzly Predator Series Coins. Damstra previously concluded the Canadian Wildlife Series with the final two designs in that six-coin series and created all four images in the Birds of Prey Series.

On the reverse side of 2019 1 oz Silver Canadian Grizzly Predator Series coins is the image of an imposing grizzly as it charges at its prey. The grizzly isn’t an ambush killer, relying instead on its overwhelming size and power to defeat prey in most cases. The grizzly is the second-largest carnivore on the North American continent behind only the polar bear.

The obverse of the 2019 Silver Canadian Grizzly Predator Series Coins includes the effigy of Queen Elizabeth II. Her Majesty is featured in right-profile relief in a design created in 2003 by Susanna Blunt for the Royal Canadian Mint.

Both the obverse and reverse design fields have radial lines engraved into the surface to combat counterfeiting. The reverse side has an additional security feature in the form of the micro-engraved maple leaf privy mark.

These 2019 1 oz Silver Canadian Grizzly Predator Series Coins are available to you in Brilliant Uncirculated condition. These coins are housed inside of individual flips, tubes of 25 coins, or Monster Boxes of 500 coins.

We encourage Silver.com customers to call us with questions at 888-989-7223. You can also reach us online through our live chat and email address features.