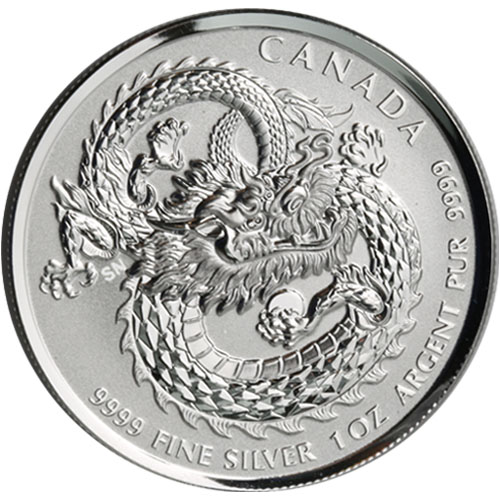 The dragon is one of the most important animals in Chinese culture. Depicted in the Chinese lunar calendar, the dragon has long been used in countless cultural traditions that date back to the Neolithic period of human history. In the modern era, the Chinese dragon is a popular figure on gold and silver coins for sale. Now, 2019 1 oz Silver Canadian Lucky Dragon High Relief Coins are available to you for purchase online at Silver.com.

In Chinese mythology and culture, the dragon has long been a symbol of imperial power and military strength. The dragon is also associated with good luck and fortune. Some of the earliest depictions of the dragon or dragon-like figures come from the Neolithic period in China, with early depictions of the creature found on clay pots with dragon motifs.

As humanity moved into the classical era, the dragon became even more prominent in literature and mythology in China. This included more than 100 different ancient dragon names used in Chinese classical texts. Examples include Tianlong, a dragon that guarded heavenly places and pulled divine chariots. Shenlong was another example and was the thunder god who controlled the weather.

The obverse face of 2019 1 oz Silver Canadian Lucky Dragon High Relief Coins features Queen Elizabeth II. Her Majesty has been depicted on Canadian coins in right-profile relief since her reign began in 1952. The Queen’s bust as shown here was created in 2003 by Susanna Blunt and is the first monarch effigy of her reign, and first since her father King George VI’s reign, to showcase the monarch without a crown.

On the reverse side of 2019 Silver Canadian Lucky Dragon High Relief Coins is a design from Simon Ng. The same design in use in this series since its debut, the Lucky Dragon is a Chinese dragon depicted in a figure eight. The number eight is another symbol of luck in Chinese culture.

These 2019 1 oz Silver Canadian Lucky Dragon High Relief Coins are available to you in either individual plastic flips or mint tubes of 25 coins. All coins are available in Brilliant Uncirculated condition and boast a high-relief strike. High-relief specimens have a greater visual depth to the designs courtesy of greater pressure used in the coining process.

Silver.com customer service is available to assist you at 888-989-7223. You can also connect with us live online through our chat service or simply send us an email.