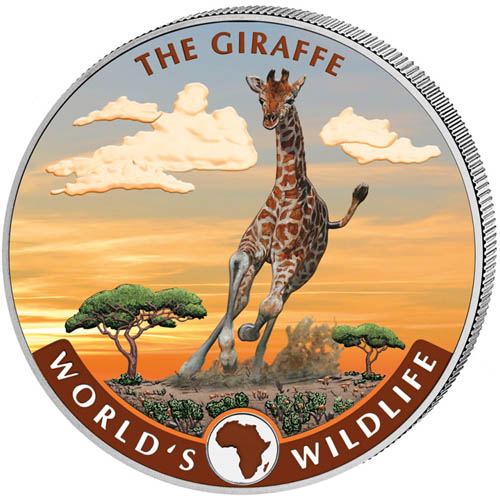 Giraffes are one of the more unique animals living in the world today. The tallest terrestrial animal alive, the average male giraffe can grow to heights of 14.1 ft. to 18.7 ft. The tallest recorded member of the species was 19.3 ft., with the tallest female recorded at 17 ft. The giraffe species is the focus of the first release in the new World’s Wildlife Series. Today, 2019 1 oz Colorized Silver Congo Giraffe Coins are available to you online at Silver.com.

The giraffe is considered vulnerable by the International Union for Conservation of Nature, placing it just within the threatened status range for global species. As of 2016, an estimated 97,500 members of the giraffe species are believed to live in the wild with an additional 1,600 living in zoos around the globe.

All of the 2019 1 oz Colorized Silver Congo Giraffe Coins in this product listing come to you with an individual plastic capsule to house the coin. The individual specimens are in Brilliant Uncirculated condition and have colorized lacquer added to the reverse design elements for enhanced visual appeal.

The Democratic Republic of Congo Coat of Arms is featured on the obverse side of the 2019 1 oz Colorized Silver Congo Giraffe Coin. This is the most recent emblem of the nation and was adopted in 2006. The national coat of arms for Congo has undergone five variations since 1971, with four of those variations debuting since 1997 alone. This version of the emblem is similar to that used by Zaire from 1971 to 1997 and the Congo from 1997-1999. The primary difference here is the elephant tusk has been shifted to the left of the leopard head and there is now just a single spear on the right, rather than two crossed spears below.

A giraffe runs playfully on the reverse of the 2019 Colorized Silver Congo Giraffe Coin. Despite the size of the giraffe, it is relatively vulnerable to attacks by a pride of lions or other predators working in pairs to take the massive beasts down.

The colorized lacquer applied to this side brings natural hues to the design. Most impressive among them is the background field that depicts the African steppes at sundown as the sun dips behind the horizon and leaves a field of orange, yellow, and red colors painting the sky.

Please contact Silver.com with any questions about this 1 oz silver coin. You can call us on the phone at 888-989-7223, chat with us live online, or email us directly.