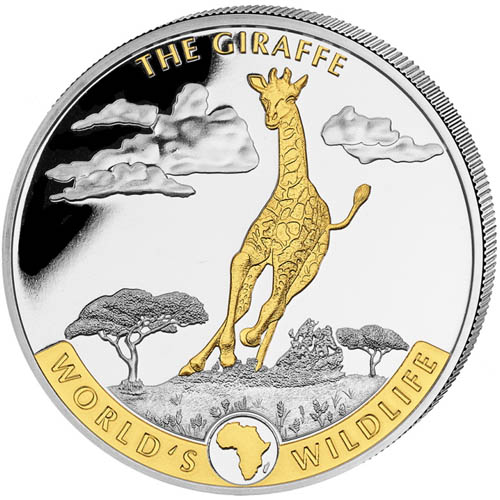 In the new collection of silver for sale in the World’s Wildlife Series, the giraffe is the debut design. In addition to its 30,000-coin bullion mintage, the design is available in colorized and gilded versions as well that have a mintage of 5,000 coins each. The gilded coin creates contrast with the application of a thin layer of 24-karat gold. Now, 2019 1 oz Silver Congo Giraffe Coins are available to you for purchase online at Silver.com.

The number of coin programs available from the African continent has grown with each passing year. Some coins are limited releases or short-term series, while others are long-running collections that have built a name among numismatists. For example, the Somalia Elephant collection is the longest-running at the moment with a history that dates back to 1999.

On the obverse side of 2019 1 oz Silver Congo Giraffe Coins is a depiction of the national coat of arms. This emblem is similar to past versions used by Zaire and the Congo. Adopted in 2006, this version of the coat of arms includes a leopard head in front-facing relief with an elephant tusk on the left and a single spear on the right. The national motto is inscribed around the seal itself, while the coin surface has inscriptions of the date mark, face value, nation of issue, weight, purity, and metal content. The border design offers a stippled design.

The reverse face of the 2019 1 oz Silver Congo Giraffe Coin depicts a giraffe as it runs along the savannahs of Africa. The tall ruminant is shown with a 24-karat gilded gold layer. In the primary design, only the body of the giraffe has the 24-karat gold. Additionally, inscriptions of “The Giraffe,” “World’s Wildlife Series,” and the African continent outline have the gilded gold layer applied.

These 2019 1 oz Silver Congo Giraffe Coins are available to you with 24-karat gold applied only on the aforementioned features of the coin. Each one is available in Brilliant Uncirculated condition and ships with its own capsule.

We encourage Silver.com customers to call 888-989-7223 with questions. You can also connect with us on the web through our live chat and email address features.