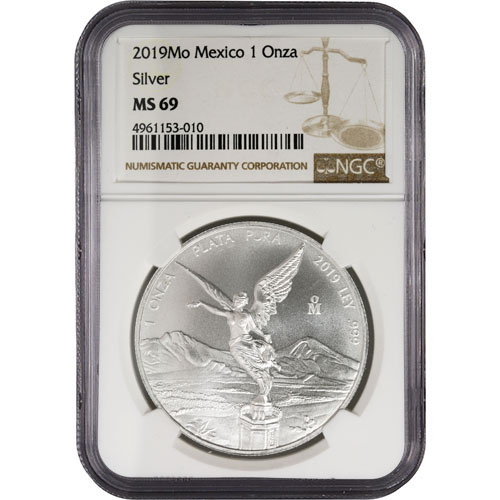 Silver Mexican Libertad coins represent the most robust collection from the Mexican Mint. The coins debuted in 1982 with only a 1 oz coin available and have since expanded to include a total of eight different weights that range from 1/20 Troy oz to 1 Kilogram. Now, 2019 1 oz Silver Mexican Libertad Coins are available to you for purchase online in perfect condition at Silver.com.

The Mexican Mint made the Silver Libertad the first major silver bullion coin with its 1982 introduction. The coins were initially available only as a 1 oz option and would remain that way until 1991 when fractional-weight coins were introduced into the series. These were eventually followed by 2 oz and 5 oz coins, with the series concluding its expansion with a one kilogram coin in 2008.

On the obverse of these 2019 1 oz Silver Mexican Libertad Coins is the image of Winged Victory. Her figure as depicted here comes from the Mexican Independence Victory Column in Mexico City that was erected in 1921 to mark the 100th anniversary of the nation’s independence from Spain.

The reverse side of 2019 Silver Mexican Libertad coins features the modern coat of arms for Mexico. This design element is surrounded by 10 historical versions of the coat of arms.

These 2019 1 oz Silver Mexican Libertad coins are available to you with a near-perfect grade from the NGC. Coins in Mint State 69 condition have full, original mint luster with a maximum of two minor detracting flaws. These flaws are limited to minuscule contact marks or hairlines outside of the primary focal points of the coin.