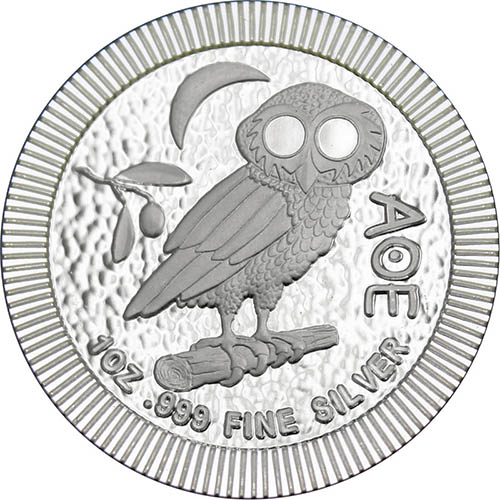 Athena was known as the goddess of wisdom in Ancient Greek, while the Romans referred to her as Minerva. The symbol associated with Athena was the owl, a symbol of wisdom and knowledge. The Owl of Athena was commonly used on Ancient Greek coinage starting in the 6th century BC. The 2019 1 oz Silver Niue Athena Owl Stackable Coins are currently available to you for purchase online at Silver.com with this iconic imagery.

The Owl of Athena commonly accompanies Athena in representations of her figure and was an easy connection. The owl is associated with wisdom and knowledge, and Athena was known as the goddess of wisdom. The figure of her owl featured on Ancient Greek coinage over the course of nearly 500 years from 510 BC to 38 BC.

This symbol was first found on the tetradrachm, an Ancient Greek Silver Coin equivalent in value to four drachmae. The tetradrachm replaced earlier coinage when it was introduced and remained a popular coin design for centuries. The Owl of Athena is almost mechanical in appearance and features two major design elements that remain on this collection.

On the reverse of 2019 1 oz Silver Niue Athena Owl Stackable Coins is the image of the Owl of Athena. Included in the design field on this side are two ancient elements. There is an olive sprig and berry found behind the owl’s head and an engraving of “AOE” to the right of the design field, which translates as “of the Athenians.”

The obverse side of 2019 Silver Niue Athena Owl Stackable Coins features the portrait of Queen Elizabeth II. Her Majesty’s effigy features on the obverse of all British coinage and Commonwealth coinage. Niue is a Commonwealth nation and uses the fourth-generation portrait of Elizabeth II. This design was created in 1998 by Ian Rank-Broadley for the Royal Mint of England.

These 2019 1 oz Silver Niue Athena Owl Stackable Coins are offered to you inside of protective packaging. SilverTowne issues these coins with a hammered background on both sides to give the look and feel of ancient coinage. Additionally, these coins have raised edges that make it easier to stack them securely.

We encourage all Silver.com customers to contact us at 888-989-7223 with questions about silver for sale. You can also connect with us online using our live chat and email address features.