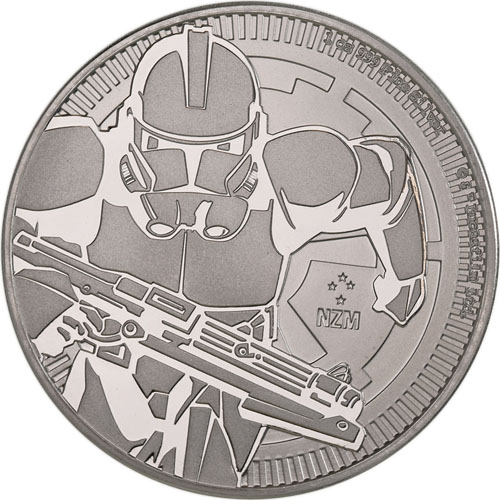 Any quantity available for $6.29 per coin over spot!

Clone Troopers are one of the most recognizable, if not nameless and faceless, characters within the Star Wars franchise of feature films. The Clone Troopers first appeared in the 2002 release of Star Wars Episode II: Attack of the Clones and would go on to feature in the 2005 release of Star Wars Episode III: Revenge of the Sith. Though these figures wore the same white-armored suits as their counterparts in the original trilogy, they were different altogether in nature. Right now, 2019 1 oz Silver Niue Star Wars Clone Trooper Coins are available to purchase online at Silver.com.

Each of the individual 2019 1 oz Silver Niue Star Wars Clone Trooper Coins available to you through this product listing comes in Brilliant Uncirculated condition. The coins are offered either in protective individual packages, mint tubes of 25 coins, or Star Wars-themed monster boxes of 250 coins. The monster box includes a total of 10 tubes of 25 coins.

Clone Troopers are unique from the Stormtroopers of the original trilogy in that each one originates from a singular person. The famed bounty hunter Jango Fett was cloned and the genetically modified humans that resulted from this action were known as Clone Troopers. These foot soldiers served in the Grand Army of the Republic in the aforementioned films.

The obverse side of all 2019 1 oz Silver Niue Star Wars Clone Trooper Coins includes the right-profile portrait of Queen Elizabeth II. Her Majesty is featured in this fourth-generation portrait from Ian Rank-Broadley and was depicted on British coinage from 1998 to 2015, with some Commonwealth nations continuing this design’s use through 2019.

On the reverse of 2019 Silver Niue Star Wars Clone Trooper Coins is one of those Clone Troopers ready for battle. The figure appears as he runs toward battle with the Imperial Logo in the background. The designs in this series are officially licensed images and appear with the copyright seal of Lucasfilm Ltd.

Please don’t hesitate to contact Silver.com with questions about buying silver. You can call us on the phone at 888-989-7223, chat with us live online, or simply send us an email with your inquiries.