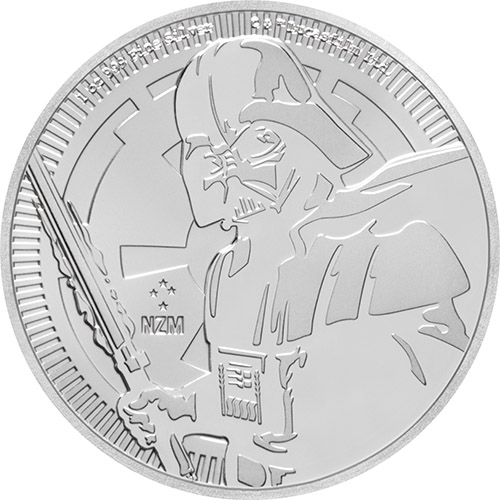 One of the most popular character images in the silver coins for sale from the New Zealand Mint’s Star Wars bullion collection is that of Darth Vader. The epitome of evil throughout the feature films in the Star Wars universe, Vader is a good guy lured to the dark side of the force by its seemingly overwhelming power. Right now, 2019 1 oz Silver Niue Star Wars Darth Vader Coins are available to purchase online at Silver.com.

Each 2019 1 oz Silver Niue Star Wars Darth Vader Coin in this product listing comes to you with a protective plastic flip for individual coins. If you buy multiples, you can expect to receive your coins inside of plastic tubes of 25 or Star Wars-themed Monster Boxes of 250 coins in 10 tubes. All coins in this listing are in Brilliant Uncirculated condition.

Darth Vader is the evil beast that Anakin Skywalker was transformed into after being devastated in a lightsaber battle with his former master, Ben Kenobi. To preserve his life and the power he wields with the dark side of the Force, Emperor Palpatine had Anakin saved with the black suit that Vader wears throughout his appearances in the feature films.

On the reverse side of the 2019 1 oz Silver Niue Star Wars Darth Vader Coins is a depiction of Vader with his lightsaber in his right hand. The background field is engulfed by the Imperial logo. Vader’s lightsaber is polished and frosted to stand out against the rest of the design. The New Zealand Mint logo features within the design field and consists of the initials “NZM” and the four stars that form the Southern Cross on the New Zealand flag.

The obverse face of 2019 1 oz Silver Niue Star Wars Darth Vader Coins includes the effigy of Queen Elizabeth II. This massively popular design was created for the Royal Mint of England in 1998 by Ian Rank-Broadley. This right-profile portrait of the Queen has appeared on British, Australian, Niue, Fiji, and Tuvalu coins, just to name a few nations.